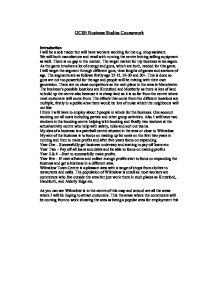 GCSE Business Studies Coursework Introduction I will be a sole trader but will have workers working for me e.g. shop assistant. We will both manufacture and retail with running the centre butting selling equipment as well. There is no gap in the market. The target market for my business is teenagers. As the game involves a lot of energy and guns, which are both, needed for this game. I will target the segment through different guns, time lengths of games and sections of age. The segments are as follows firstly age 12-15, 16-30 and 30+. This is done so guns are not too powerful for the age and people will be mixing with their own generation. There are no close competitors as the next place in the area is Manchester. The business's possible locations are Knutsford and Mobberly as there is lots of land to build up the centre also because it is cheap land as it is so far from the centre where most customers will come from. The effects that come from the different locations are multiple, firstly in a public area there would be lots of noise which the neighbours will not like I think I will have to employ about 5 people in whole for the business. ...read more.

So bringing this into the area may be very successful for business. Also this shows if the paintball centre was brought into the area it would be very successful. Question two when I asked a reasonable price most people were accepting to pay no more than 15 pounds so I would work round break even with ticket prices at �13.50 and see how many tickets would need to be sold and then if necessary higher or lower prices for high profits. Question three showed that most people do not want to leave a 10 miles radius meaning that mainly advertisement can be done in that area and focus on customer round that area, also to build then centre no more than10 miles out of Wilmslow to satisfy the customers. With Question four many people just over half the people have not paintball before so new customers can be attracted to this as a new experiences and hopefully come regularly bringing in steady profits for the business. Question 5 shows that at the moment Wilmslow citizens are mainly jus satisfied with the facilities in Wilmslow so maybe looking for something not seen everywhere like paintball which would be a new attraction and bring customers happy with there area and give Wilmslow a good reputation flooding the area with customers. ...read more.

Place There will be two places where the Wilmslow Paintball Centre will place. There will be a booking centre which will take place in the middle with a renting price of �250 a week as well as the actual paintball centre set up in Mobberly where there is lots of land. I will keep the booking centre in the town centre as a lot more people will come across it here rather than in the rural area of Mobberly which will only attract a few customers. The rent in Mobberly is a lot cheaper as 10 acres of land including the building is �300a week. I have chosen the paintball activities to take place in Mobberly due to the masses of land compared to Wilmslow which is a lot cheaper price for what I am getting. Finance The main reason I have confidence in my business is because of the lack of this facility, as from looking at other paintball centres around the country they have all been hits, in London, Liverpool and even Manchester. So I feel that I can provide the same success with the Macclesfield/Wilmslow area. Also my questionnaire helps to prove that the youth is after something new as 70% of the people I asked though that the areas facilities were only ok and hopefully this is the fresh Idea that they need. ...read more.