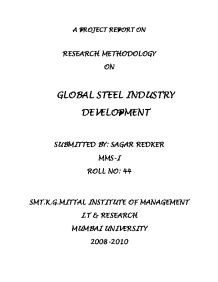 A PROJECT REPORT ON RESEARCH METHODOLOGY ON GLOBAL STEEL INDUSTRY DEVELOPMENT SUBMITTED BY: SAGAR REDKER MMS-I ROLL NO: 44 SMT.K.G.MITTAL INSTITUTE OF MANAGEMENT I.T & RESEARCH MUMBAI UNIVERSITY 2008-2010 Acknowledgement To make all task of great worth require contribution from many people and this project is also not exception to that. I am thankful to Dr.C.V.Joshi, Director of Smt.K.G.Mittal Institute Of management, I.T & Research, Mumbai for allowing me permission to perform this project. The last but not the least, I would like to pay my thanks to my parents without who's support and inspiration it was really hard task for me. I wish to express my gratitude to those who may have contributed to this work, even though anonymously. I am thankful to all those whose name are mentioned above and even to those whose names need not be mentioned. GLOBAL STEEL INDUSTRY DEVELOPMENT & GOVERNMENT SUPPORT FOR THE CHINESE AND INDIAN (STEEL INDUSTRIES: THE PERILS OF OVEREXPANSION) OVERVIEW OF IRON AND STEEL INDUSTRY Introduction Steel is crucial to the development of any modern economy and is considered to be the backbone of human civilisation. The level of per capita consumption of steel is treated as an important index of the level of socioeconomic development and living standards of the people in any country. It is a product of a large and technologically complex industry having strong forward and backward linkages in terms of material flows and income generation. All major industrial economies are characterised by the existence of a strong steel industry and the growth of many of these economies has been largely shaped by the strength of their steel industries in their initial stages of development. Steel industry was in the vanguard in the liberalisation of the industrial sector and has made rapid strides since then. The new green-field plants represent the latest in technology. Output has increased, the industry has moved up in the value chain and exports have risen consequent to a greater integration with the global economy. ...read more.

with commercial considerations; � Conversion of debt-to-equity in steel companies; � Debt forgiveness and inaction regarding nonperforming loans; � Preferential loans and directed credit, including "policy loans" to favored state-owned enterprises on noncommercial terms; and � Currency manipulation. The Chinese government's steel policy explicitly calls for continued support for the expansion and modernization of the steel industry. Projects either under construction or in the planning stage would add another 150 million tons of capacity. At the same time, the Chinese government apparently realizes that the industry in China already has excess capacity, as it is planning to close 55 million tons of capacity in older, smaller mills. The Indian government owns the largest steel producer in India, and provides benefits to all producers through a number of programs, including a broad variety of export incentives and controls over raw material prices. The Indian government plans for Indian steel capacity to more than double by 2019, and intends to assist the process by providing the Indian industry with still further export incentives, and even buyback provisions. Individual states, especially Orissa, have extremely ambitious plans to leverage government support into an enormously expanded industry. The construction of excess capacity in China and India will cost both countries billions of dollars in scarce capital. Overexpansion of the Chinese steel industry has already had negative effects on producers in the rest of the world; overexpansion of the Indian industry will only exacerbate the situation. Steel producers in both the developed and developing countries, including Brazil, have expressed concern over the building of excess capacity in these countries. Elimination of state support for the steel industry by China, India, and all other developing and developed countries is likely to limit excess capacity, and is more likely to result in a stable and healthy global steel industry. GOVERNMENT SUPPORT FOR THE STEEL INDUSTRY IN CHINA AND INDIA INTRODUCTION This paper has been prepared by the trade associations representing the vast majority of steel production in North America, including the American ...read more.

CONCLUSION Between the 1950s and the 1970s, the developed economies built capacity far in excess of demand, largely as the result of government intervention and government subsidies. After their governments decided to allow the market to decide the industry's size, such countries as the United Kingdom and France took significant amounts of capacity out of production. Contraction was not restricted to countries where the government actively intervened in the steel industry, however; largely in response to global overcapacity caused by subsidies, the U.S. steel industry was also forced to reduced capacity, even though the industry had operated with little government support or intervention. It now appears that China may have repeated the mistake of building too much capacity too fast, and India may be on the verge of doing so. In both cases, the creation of excess capacity has been encouraged by government policies and actions. Construction of excess capacity in China and India will have adverse consequences for steel producers and steel consumers worldwide. It will also deprive these countries of valuable investment funds that they could apply to other, more productive uses. The Indian and Chinese governments and industries should work with their colleagues in the rest of the world to avoid these consequences, and to ensure that their steel industries develop in a manner that is economically sustainable and that brings the maximum benefit to their economies and those of their trading partners around the world. MARVARI VIDYALAYA SANCHALIT (Approved by Govt. of Maharashtra and AICTE, New Delhi) Affiliated to UNIVERSITY OF MUMBAI ______________________________________________________________________________ Bhandarwada, Malad-(west), Mumbai-400 064. Tel.: 28831674 / 28831787 Ref. No.______________ Date: CERTIFICATE This is to certify that Mr.SAGAR REDKER , Roll no.44 have submitted this project report entitled "GLOBAL STEEL INDUSTRY DEVELOPMENT" in fulfillment of the requirements for the II-semester of M.M.S. (Master of Management Studies) course during the academic year 2008-2010. Teacher I/C/Guide Director Signature (Intern Examiner) Date: ...read more.