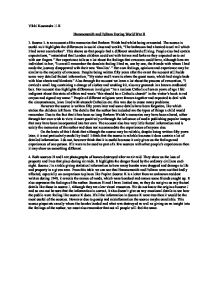 Vikki Kosmaska 11R Hammersmith and Fulham During World War II 3. Source L is an account of the memories that Barbara Walsh had whilst being evacuated. The source is useful as it highlights the differences in social class and wealth, "The bathroom had a heated towel rail which I had never seen before". This shows us that people had a different standard of living. People also had certain expectations, " astonished that London children could eat with knives and forks as they expected us to eat with our fingers." Her experience tells us a lot about the feelings that evacuees could have, although hers are individual to her, "I can still remember the desolate feeling I had as, one by one, the friends with whom I had made the journey disappeared with their new 'families'." ...read more.

this was due to cause many problems. However the source is written fifty years later and some details have been forgotten, like which station the children left from. The details that the author has included are the types of things a child would remember. Due to the fact that it has been so long Barbara Walsh's memories may have been altered, either through her own wish to view it more positively or through the influence of media publishing popular images that may have been incorporated into her own. The account also has very little factual information and is solely the memories of the author and does not accommodate the experiences of anyone else. On the basis of this I think that although the source may be reliable, despite being written fifty years later, it is not particularly useful by itself. ...read more.

Source K is a letter from an unknown resident written during 1940, it reveals the names of roads, which were bombed and names some friends caught up. It also expresses the feelings of the author. Sources H and I have limited use, as they do not give us any factual details like those in source J, although they are clear visual resources. We do not know the origin of source J and so can not be sure that the information is correct, it also doesn't give us any emotional details to see how the public were feeling like source K does. If all the information in Source K were true then it would be the most useful of the sources. However due to gossip and misinformation the source maybe unreliable. This source pinpoints exactly where the bombs landed and what was destroyed as well as giving us an insight into the feelings of the author, we must also remember that not all people will feel the same. ...read more.