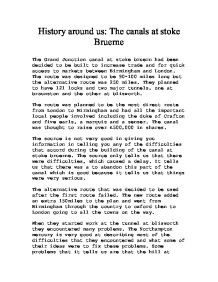 History around us: The canals at stoke Bruerne

History around us: The canals at stoke Bruerne The Grand Junction canal at stoke bruern had been decided to be built to increase trade and for quick access to markets between Birmingham and London. The route was designed to be 90-100 miles long but the alternative route was 250 miles. They planned to have 121 locks and two major tunnels, one at braunston and the other at blisworth. The route was planned to be the most direct route from London to Birmingham and had all the important local people involved including the duke of Crafton and five earls, a marquis and a senser. The canal was thought to raise over �500,000 in shares. The source is not very good in giving you information in telling you any of the difficulties that accord during the building of the canal at stoke bruerne. The source only tells us that there were difficulties, which caused a delay. It tells us that there was a to abandon this part of the canal which is good because it tells us that things were very serious. The alternative route that was decided to be used after the first route failed. The new route added an extra 150miles to the plan and went from Birmingham through the country to oxford then to London going to all the towns on the way. When they started work at the tunnel at blisworth they encountered many problems. ...read more.

Question 2:To what extent is source A views on the impact of the canal on stoke bruerne 1805 - 1835 supported by other sources? Source A is an extract from "A tour of the Grand Junction canal in 1819" by author: john hassell. This book is one mans view on each of the villages he visits along the Grand Junction canal. Before the canal was built the village of stoke bruerne is described as a quite and tranquil, rural village. The author john hassell describes all the things he sees from cows grassing in the fields to what different boats he comes across. In parts of the extract he tells us what the views are like and how all the buildings he sees are unique in there own way, he describes a old gothic church he sees and how it is situated at the highest point of the hill. In the whole of this extract from his book he gives us all the positive points of the village and how the canal has just made the village a better place to live in comparison to how it was before the canal was built. It is described very well how the village is making more money and is a more exiting place to be. We are told of how there are a huge variety of jobs for people and that women even had more jobs they could choose from. ...read more.

Like question 2 this source is an extract from a book. And we do not no if it is reliable or not .It tells us how the railway was taking business away .The source agrees with other sources though like the British economic and social history, 1700 to 1870 by Philip sauvain, which says the same as source B about business being taken away. It is also right about how the canal could not keep up with the speed of the canal boats and how convenient it was by railway. From are sight visit I found out that the canal boats were very slow some only going 4miles per hour maximum. The percentage of the dividend table has also dramatically dropped from how it once was and is shown now to be only 3 percent at its lowest and at a average of 4 between 1879 - 1928. In conclusion source B is not a totally reliable source although it does tell us some facts that are also shown in other sources that agree with what source B is saying. But from source B we do no that stoke bruerne did greatly change and is a lot different from how it was before. We also learn that the canal was no competition for the railway, which was the most successful way of transport like the canal had once been, and the canal was no longer making money. ...read more.