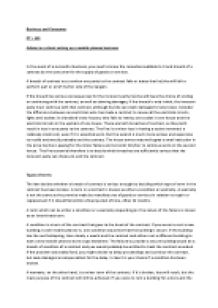 How Breach of Contract Might Affect a New Business.

﻿Business and Consumer P7 + M3 Advice to a client setting up a mobile phones business In the event of a successful business, you need to know the remedies available to it and breach of a contract by the consumer for the supply of goods or services. A breach of contract occurs when one party to the contract fails or states that he/she will fail to perform part or all of his/her side of the bargain. If the breach has serious consequences for the innocent party he/she will have the choice of ending or continuing with the contract, as well as claiming damages; if the breach Is only trivial, the innocent party must continue with that contract, although he/she can claim damages for any losses. Consider the difference between an electrician who has made a contract to renew all the electrical circuits, lights and sockets in a landlord?s two houses, who fails to renew; one socket in one house and the electrical circuits in the upstairs of one house. These are both breaches of contract, as they both result in loss in one party to the contract. ...read more.

A warranty, on the other hand, is a minor term of the contract. If it is broken, loss will result, but the main purpose of the contract will still be achieved. If you were to rent a building for a store and the rental company offered you one which had shutters, if the shutters didn?t go all the way down or weren?t working properly as they are intended to, you would be expected to pay less and be compensated if the shutter didn?t go back up, for you to enter the building or store. This would be a warranty and you have to continue with the contract, but would expect compensation for any minor incidents that could occur. Actual breach and anticipatory breach Breach of contract can occur in two ways: actual breach and anticipatory breach. Actual breach occurs either through poor performances of the contract, where there is performance of the contract but the work is done badly or the goods are substandard, or by non-performance where the work is done or the goods are not provided at all. Anticipatory breach occurs when one party to the contract states or otherwise indicates that there will not be performance of the contract. ...read more.