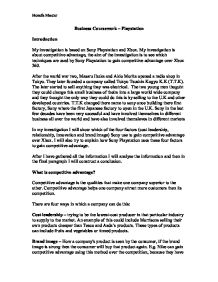 How does Topshop gain competitive advantage over clothing rivals

Business Coursework - Playstation Introduction My investigation is based on Sony Playstation and Xbox. My investigation is about competitive advantage, the aim of the investigation is to see which techniques are used by Sony Playstation to gain competitive advantage over Xbox 360. After the world war two, Masaru Ibuka and Akio Morita opened a radio shop in Tokyo. They later founded a company called Tokyo Tsushin Kogyo K.K (T.T.K). The later started to sell anything thay was electrical. The two young men thoguht they could change this small business of theirs into a large world wide company and they thought the only way they could do this is by selling to the U.K and other developed countries. T.T.K changed there name to sony once building there first factory, Sony where the first Japanese factory to open in the U.K. Sony in the last few decades have been very sucessful and have involved themselves in different business all over the world and have also involved themsleves in different markets In my investigation I will show which of the four factors (cost leadership, relationship, innovation and brand image) Sony use to gain competitive advantage over Xbox. ...read more.

Being the first with a new idea is a very strong way to gain competitive advantage. How innovative is the new Playstation 3? The Playstation has distinct features that the Xbox doesn't have. The Ps3 has a 40 and 80 gigabyte hardrive. This memory is much larger than the memory capacity on Xbox. The PS3 can only be played on the HD televisions. This is because it gives the gamer the best experience possible and this is a unique feature and is also not available on Xbox. This would give the customer something to think about as more games can be saved on the PS3 and as technology is growing more memory is needed because games can be downloaded straight from stores online (PLAYSTATION(r)Store). Playstation have gained competitive advantage over Xbox through process innovation. Process innovation is changing how a product is made. So Playstation used process innovation by making their new Playstation with blu-ray disks. This will help them to gain competitive advantage because a gamer of Xbox would not have experienced this, as no other consoles in the market have a built in blu-ray disk. Relationship Playstation have tried to get closer to their consumers by using new ideas like PLAYSTATION(r)Store, this feature on the latest Playstation console allows PS3 owners to surf the internet for free. ...read more.

To build reputation it takes a long time, reputation cannot be just built in a matter of days or months, but takes many years. It is important that Playstation does not have a bad brand image or reputation this is because consumers would not buy Playstation consoles if they are known to be selling faulty goods. Playstation has a very good brand image this is because most of the Playstation in the past e.g. PS2, PS One have been very successful and has gained Playstation respect and reputation. Playstation can use there excellent brand image in different ways. Even if Playstation 3 isn't the best product in the market, some customers will still choose the PS3 over the Xbox because they may have bought previous Playstation products and may have been satisfied with it therefore they may buy another Playstation product instead of buying the Xbox. This is an example of customer/ brand loyalty. Conclusion Sony has been successful with the launch of the new PS3 and has gained competitive advantage over Xbox in different ways. Sony has used a combination of all four ways of gaining competitive advantage, using innovation and its reputation as the main two factors to drive its new product forward. Playstation are always trying to produce new products and try to differentiate their products from competitors by using innovation. Webliography http://www.hmv.co.uk/hmvweb/navigate.do?pPageID=2508&gclid=CJbPgJ3GhI8CFQNjMAod1Tggug http://www.argos.co.uk/webapp/wcs/stores/servlet/Search?storeId=10001&catalogId=1500000701&langId=-1&searchTerms=ps3&x=0&y=0&cmpid=GG05X&engine=adwords!7513&keyword=playstation+3&match_type= http://www.xboxprices.co.uk http://www.hardcoreware.net/reviews/review-356-1.htm Hozefa Master ...read more.