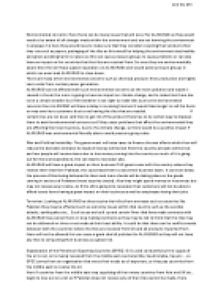 How Environmental And Global Events Could Affect A Business.

﻿Unit 38- M3 Environmental concerns: Here there can be many issues that will occur for AL-MURAD as they would need to be aware of all changes made within the environment and are not harming the environment in anyways. So here they would have to make sure that they consider recycling their products that they use such as papers, packaging of the tiles as this would be helping the environment stay healthy and green avoiding harm to nature as this can cause pressure groups to cause problems or can also have an impact on the countries that the tiles are received from. So once they are environmentally aware then this will have a good reputation on AL-MURADs and would avoid pressure groups in which can even lead AL-MURAD to close down. There are many other environmental concerns such as chemical products from production and highly toxic under from nuclear power generation. AL-MURAD can be affected with such environmental concerns as the more pollution and waste is caused in the air the more is going to have an impact on climate change, and to make tiles there ...read more.

As if the UK is going into recession then customers will not be able to afford luxury items having a great impact on their business as well as employees losing their jobs. Terrorism: Looking at AL-MURAD as they receive their tiles from overseas such as countries like Pakistan they may be effected such as economy issues within that country such as the suicidal attacks, earthquakes etc... Such issues are built up and certain firms that have made contracts with AL-MURAD may cancel them or stop making contracts as they may be led to think that the tiles may not be delivered on time or not made at their best ability. It could be that there can be conflicts made between both the countries where the tiles are received from UK and all products imported from there will not be allowed this can cause a great deal of problem for AL-MURAD as they will not have any tiles to sell putting their business as a great risk. ...read more.

If AL-MURAD begin importing tiles from Poland then it will be cheaper for them and beneficial for their business, because importing tiles from Poland would not have to go through as many processes as such countries already be aware of the EU law and regulations, such as checks, security, transportation etc? Global issues: Global issues are caused by both economic and political international events; they make a big effect on the activities of businesses within the UK and international. Issues such as terrorist?s attacks and war can lead to great problems for businesses all over the world due to a life risk. According to certain global economy issues such as terrorist attacks such as 9/11 straight away there was major changes made in the wide range of many companies shares. And some shareholders sold their shares as pressure of protection and security builds up, this affects many companies and issues. AL-MURAD would here then have to focus on the different issues and take in consideration of all the global issues occurring around the world as everything links with one another specially when AL-MURAD receive their tiles from overseas. ...read more.