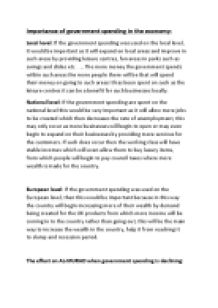 How Government Spending And The Multiplier Effect Affect A Business.

﻿Importance of government spending in the economy: Local level: If the government spending was used on the local level, it would be important as it will expand on local areas and improve in such areas by providing leisure centres, fun areas in parks such as swings and slides etc?.. The more money the government spends within such areas the more people there will be that will spend their money on going to such areas it has been spent on such as the leisure centres it can be a benefit for such businesses locally. National level: If the government spending are spent on the national level this would be very important as it will allow more jobs to be created which then decreases the rate of unemployment, this may only occur as more businesses will begin to open or may even begin to expand on their businesses by providing more services for the customers. If such does occur then the working class will have stable incomes which will even allow them to buy luxury items, from which people will begin to pay council taxes where more wealth is made for the country. ...read more.

From here they would have to fall and losses will be made leading the AL-MURAD profit margin to decrease as they will cut down on the prices of their products. The positive effect of government spending on AL-MURAD: AL-MURAD will begin making profits as there will be high demand for their tiles due to the improvements made on local areas and expansions (housing and environment) of areas from which people will buy their tiles as they will have the money to do so. Here more jobs will be created as AL-MURAD will have the money from the profits made to be able to expand on their businesses so their profit margin will increase from which they can plan on their future business by expanding it more such as locating their business/stores in more areas, different cities, from here more jobs will be created as the new stores opening workers would be needed so this would be beneficial for the employees who are in need of a job, this would be another way of increasing the wealth of the country as more and more people ...read more.

To be able to calculate the multiplier there would be certain formulas used as shown below: Multiplier: 1 1. Proportion of extra income spent People will then have chance to save up to 10% of their income and then have the rest 90% to spend on day to day needs. So here the multiplier will then change to: = 1 = 1 1-0.9 0.1 = 10% So if the government decided to spend up to £25 million the calculation Would be 25million X 10= 25 Million This is the extra amount of money altogether people will have, due to the extra savings they had saved for future planning’s or buy products from overseas. Due to economy having up to £250 million in their pockets this will be beneficial for AL-MURAD as the people will have enough money to spend on luxury items meaning more people will buy tiles and other luxury items from AL-MURAD, which then benefits them and their business in many ways like increase in profit margins and sales. ...read more.