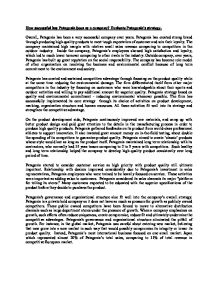 How successful has Patagonia been as a company? Evaluate Patagonias strategy.

How successful has Patagonia been as a company? Evaluate Patagonia's strategy. Overall, Patagonia has been a very successful company over years. Patagonia has created strong brand through producing high quality products to meet tough expectation of customer and win their loyalty. The company maintained high margin with relative small sales revenue comparing to competitors in the outdoor industry. Inside the company, Patagonia's employees showed high satisfaction and loyalty, which led to much lower turnover comparing to other rivals in the industry. Outside company, over years, Patagonia has built up great reputation on the social responsibility. The company has become role model of other organization on resolving the business and environmental conflict because of long term commitment to the environment and society. Patagonia has created and sustained competitive advantage through focusing on the product quality while at the same time reducing the environmental damage. The firm differentiated itself from other major competitors in the industry by focusing on customers who were knowledgeable about their sports and outdoor activities and willing to pay additional amount for superior quality. ...read more.

These public owned competitors have been forced to move to alternative distribution channels such as large department stores under the pressure of growth. When a company emphasizes on growth, such efforts often reduce uniqueness, create compromise, reduce fit and ultimately undermine the competitive advantages. Patagonia's governance and organizational structure eliminated the pitfall of growth. For instance, in the global market, Patagonia was careful about entering new market, believing that new grow into a new market in such way that would possibly compromise its integrity or lower its product quality. Instead, Patagonia's most international business focused on one small market: Japan which represented almost 20% of Patagonia's total sales, comparing to 11% of total revenue in competitive European market. Another Patagonia's distinct corporate strategy was its ability to win the hearts and minds of employees by providing them quality of work life balance with fair salary. The company was included several consecutive times on Fortune's list of the 100 best companies to work for America. Most of its employees were passionately committed to ensuring Patagonia's business success and achieving its purpose. ...read more.

In this highly competitive industry, a few addition market share can be very valuable. Second, environmental position of Patagonia also contributed to its competitive advantage by differencing it from other competitors in a market where technology improvement has become increasingly challenge. Commitment to the environment while without compromising the quality of the product inspires technical and quality innovation. While Patagonia has strong brand for its quality, its environment position certainly has contribute to the health of the Patagonia's brand, to some extend justifying its premium price over other rivals. Patagonia's environmental position was certainly not perfect without tradeoff. For instance, in the case of Patagonia switch to organic cotton, Patagonia chose to totally eliminating cottons grown with synthetic chemicals, which had negative economic hit due to higher cost for growing and handling organic raw materials. To keep its long term commitment to the environment, Patagonia needs to keep financially healthy so it can spend more on environmental activities. All in all, I believe Patagonia's environmental position contributed to company's competitive advantages in positive ways, such as strengthen the company's uniqueness against competitors, inspire innovation when attempting to reduce damage on environment, and cultivate customers intimacy by winning their trust. ?? ?? ?? ?? ...read more.