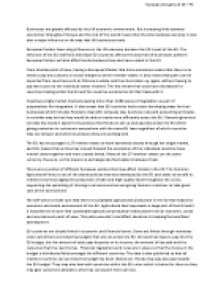 ﻿Humzah Ahmad Unit 38 ? P5 Businesses are greatly affected by the UK economic environment. But increasing links between economies throughout Europe and the rest of the world means that the international economy is now also a major influence on the way that UK businesses trade. European Factors have a big influence on the UK economy because the UK is part of the EU. The influence of the EU itself and individual EU countries affects the way that UK businesses perform. European Factors will also affect Honda because they also have a plant in the UK. From Hondas point of view, having a European Market that links economies means that there is no need to pay any customs or excise charges to other member states. It also means that parts can be imported from countries such as China as a whole and then be broken up, again, without having to pay extra costs to the individual states involved. This has meant that costs have decreased for countries trading within the EU and for countries outside the EU that trade with it. ...read more.

The Common Agricultural Policy is one of the oldest policies that was developed by the EU and seeks to benefit its members by Encouraging the production of safe and high-quality food throughout the union, supporting the upholding of thriving rural communities and giving farmers incentives to take good care of the environment The CAP aims to make sure that there is sustainable agricultural production in the EU that helps the economic and social environment of the EU. Agricultural land represents a large part of the EU and it is important to ensure that sustainable agricultural production takes place from an economic, social and environment point of view. This policy wouldn?t real affect Honda as its helping farmers/food development. EU countries are closely linked in economic and financial terms. Some are linked through monetary union and others are linked by budgets that are set across the EU. All countries have to pay into the EU budget, but the amount of each pays depends on its income, the amount of tax paid and the resources that the country has. ...read more.

The individual member states of the EU, have many policies to protect the environment, this means that businesses such as Honda in member states must try to protect the environment while operating. Social Policy refers to policy and guidelines that affect the way people live, such as welfare policies that cover things like social security and housing. A key focus of EU social policy is to combat discrimination and work towards equal treatment of people across all member states. EU social policy also seeks to support social mobility across member states so that EU citizens can move between them. It also promotes the enhancement of human rights within the EU and campaigns for improvements of the rest of the world. Honda must equally treat everyone who comes to them or deals with them, for example Honda cannot decline someone a Job because of their for example race or religion, If the person meets requirements and doesn?t get the Job Honda could get in trouble. In conclusion the EU has positive impact on Honda as they are trying to reduce costs and also trying to get a lot more people employed. ...read more.