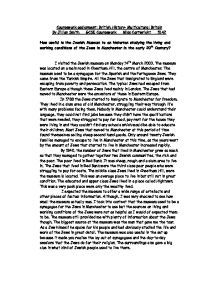 Coursework assignment: British History- Multicultural Britain By Jillian Smith GCSE Coursework Miss Cartwright 10A2 How useful is the Jewish Museum to an historian studying the living and working conditions of the Jews in Manchester in the early 20th Century? I visited the Jewish museum on Monday 14th March 2003. The museum was located on a main road in Cheetham Hill, the centre of Manchester. The museum used to be a synagogue for the Spanish and the Portuguese Jews. They came from the Turkish Empire. All the Jews that immigrated to England were escaping from poverty and persecution. The typical Jews had escaped from Eastern Europe although these Jews lived mainly in London. The Jews that had moved to Manchester were the ancestors of those in Eastern Europe. In 1788 the Jews started to immigrate to Manchester for freedom. They lived in a slum area of old Manchester, struggling their way through life with many problems facing them. Nobody in Manchester could understand their language, they could not find jobs because they didn't have the qualifications that were needed, they struggled to pay for food, pay rent for the house they were living in and they couldn't find any schools which would be able to educate their children. Most Jews that moved to Manchester at this period of time found themselves selling cheap second hand goods. Only around twenty Jewish families managed to escape to live in Manchester at this time, as the years went by the amount of Jews that started to live in Manchester increased rapidly. By 1840, the number of Jews that lived in Manchester grew so much so that they managed to gather together two Jewish communities, the rich and the poor. The poor lived in Red Bank. It was cheap, rough and a slum area to live in. The Jews that lived in Red Bank were the third class poor people who were struggling to pay for costs. ...read more.

The tour guide was fantastic. In my opinion he was the source that I gained the most information from. He was the highlight of the museum because he had great knowledge of the Jews in the early 20th Century. Being a Jew himself he spoke for his people. Although the man seemed to avoid questions that he clearly didn't have the knowledge to answer. The guide came across to me as biased throughout his talk. He made sure the audience knew how he felt about the situation of the Jews. He believed that the Jews were badly treated by everyone and they didn't deserve the punishment that they received. He focused most of his attention on the poor Jews and where abouts they had to live. The tour guide wasn't reliable both because it was only one point of view and he didn't give an equal and fair opinion. I think that there should have been more than one guide because with several the talk would have looked at more aspects of Jewish life and not just one person's opinions. The museum was a huge disappointment because I was expecting to gain a lot more knowledge about the Jews in which I didn't really achieve. It was impossible to find everything out about the living and working conditions of Jews because there wasn't a lot of information offered. The top floor of the museum was full of artefacts and the bottom floor was about the Jewish religion. I asked the guide if he had any more information about the living and working life of the Jews and he claimed that there was a room full but there was nowhere to display them. They asked the council if they could build an extension but they declined. I think this would have been a huge help because then it would have given me more knowledge about my interests. ...read more.

Visiting other museums about the Jews would be helpful because they may have artefacts that the Jewish museum in Manchester didn't have and the tour guides may have the knowledge to answer my requested questions. There are many different ways in which I could be wiser of the Jews that moved to Manchester because the world today offers a lot of information and different sources to study, which makes a better historian. Finally through all the information I have gathered from the Jewish museum of Manchester I found the place to be a great benefit to an historian studying about the Jews. Although my task was to find out about the living and working conditions of the Jews. Plenty of information was given about this topic but I expected to gain more. The reason why is because it didn't meet all my needs and I left the museum with questions that were unanswered. Questions that I didn't receive answers to, were like; did the Jews fit well into the Manchester community? Did the educated Jews take over the jobs of English citizens? I conclude that The Manchester Jewish museum is a source, which provides information in great detail about the Jews depending on what aspects of the Jews you are interested in. My interests of the living and working conditions of the Jews benefited me when I had visited the museum although I was disappointed with the amount of information I found out about this topic. I think that the museum provided irrelevant information to what I was looking for. The museum is only one source and there are plenty, more sources to look at, I think that the museum is a starting point for an historian to get the basic details of this topic. The museum is helpful, although there are many other sources, which would benefit an historian more for the research on the living and working conditions of the Jews. ...read more.