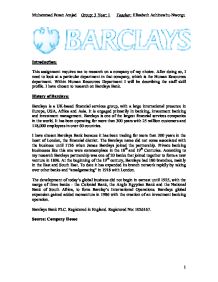 Introduction: This assignment requires me to research on a company of my choice. After doing so, I need to look at a particular department in that company, which is the Human Resources department. Within Human Resources Department I will be describing the staff skill profile. I have chosen to research on Barclays Bank. History of Barclays: Barclays is a UK-based financial services group, with a large international presence in Europe, USA, Africa and Asia. It is engaged primarily in banking, investment banking and investment management. Barclays is one of the largest financial services companies in the world. It has been operating for more than 300 years with 25 million customers and 118,000 employees in over 60 countries. I have chosen Barclays Bank because it has been trading for more than 300 years in the heart of London, the financial district. The Barclays name did not come associated with the business until 1736 when James Barclays joined the partnership. Private banking businesses like this one were commonplace in the 18th and 19th Centuries. According to my research Barclays partnership was one of 20 banks that joined together to form a new venture in 1896. At the beginning of the 19th century, Barclays had 180 branches, mainly in the East and South East. To date it has expanded its branch network rapidly by taking over other banks and "amalgamating" in 1918 with London. The development of today's global business did not begin in earnest until 1925, with the merge of three banks - the Colonial Bank, the Anglo Egyptian Bank and the National Bank of South Africa, to form Barclay's International Operations. Barclays global expansion gained added momentum in 1986 with the creation of an investment banking operation. Barclays Bank PLC. Registered in England. Registered No: 1026167. Source: Company House Definition of Human Resources in my words: In my own words the purpose of the Human Resources department is to recruit the right people with right skills for the job. ...read more.

Most of the employees do not just want to do the same work every day, instead they want some thing challenging or interesting in the job * Employees want to be trusted and given the responsibility, for employees it will be difficult for them to do the job, if they are not been trusted by the manager. Employees also want some kind of responsibility given to them in their job. * Opportunities for promotion, pay and career progression, certainly all of us want to achieve some thing by set time, meaning that we do not want to do the same job for the rest of our life instead we want to move from lower level job to higher level job. Managers should give the opportunities to their employees to progress in their career with the business. This would definitely make employees to do the effective job. * Respect, We all wanted to be respected by other in what we do. All of us want to be respected by whom we work for. Therefore it is very important that managers should respect their employees, if sometimes employees has not done the job to the best level, Manager should give the feedback to employees in a way which will not make the employees to feel isolated. Hygiene factors: Potential dissatisfiers at work include Rules and Regulation: Sometimes at work employees do not like some rules, but which must be met at work. The rule in business might be that employers MUST switch off their mobile phone while they in the premises of the business. For some employees it will become a habit to turn their mobile off when they are at work where as some employees will not like to switch off their mobile phone this factor will de motivate the staff, some times because off too many rules and regulations employees might leave the job. ...read more.

It was very important to ensure I did not get side tracked in other information that was not relevant to the assignment. I have done a report on Barclays and the first task of the assignment was to find the skill profile of Barclays. Through the information I had gathered, I had to select and write about four different job roles in Barclays, in the form of a skill profile. The next question was on motivational theories and how they can motivate the employees to do the effective job. In the third question I had to find out the impact on the internal and external factors on work force planning then I had to explain the two marketing analysis SWOT and PESTLE analysis. The final question was on workforce planning. Lastly I had to find out the performance and appraisal in Barclays. All of the answers I had to relate with Barclays. After answering all of the four questions I had to give my own recommendation to my chosen business. The recommendation I gave was to my understanding. Recommendation: In my view after doing the research on Barclay's Human Resources department I do not think they should bring any changes as to how they can motivate their staff. Having looked at their system, how it works day to day, and its advantages and disadvantages, there seemed to be little room for improvement, as the current system in place was very effective and provided the end result needed. However, there are other areas that I came across which I think could do with some changes. Based on the findings and discussion above, I would recommend the following; * Barclays Bank Plc improves on motivation strategies for example give one day holidays every week rather than every eight weeks * They give employees two months holidays with pay, instead of the present three months holidays without pay. Overall I enjoyed doing this assignment, as I was able to research extensively and learnt a lot about Barclays Bank as well as learning a lot about the topics and areas covered in the criteria of the assignment. ...read more.