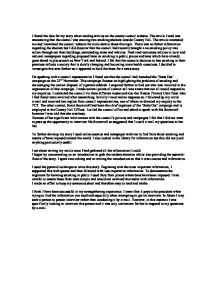 I found the idea for my story when reading articles on the county council website. The article I read was announcing that the council was erecting

I found the idea for my story when reading articles on the county council website. The article I read was announcing that the council was erecting two smoking shelters outside County Hall. The article interested me and I searched the council website for more details about this topic. There was no futher information regarding the shelters but I did discover that the council had recently brought a no smoking policy into action through out their buildings, surrounding areas and vehicles. I had read numerous articles in local and national newspapers regarding proposed bans on smoking in public places and bans which have already gone ahead in places such as New York and Ireland. ...read more.

I contacted the council via three different routes and also the Preston Primary Care Trust who I had found were involved after researching. Initially I received no response so I followed up my initial e-mail and received two replies from council representatives, one of whom re-directed my enquiry to the PCT. The other contact, Sonia Scowcroft had been the chief organiser of the 'Butts Out' campaign and is employed at the County Hall Offices. I called the council office and asked to speak with Ms Scowcroft however I was told that she was busy. Because of her significant involvement with the council's policies and campaigns I felt that I did not want to pass up the opportunity to interview Ms Scowcroft so suggested that I could e-mail my questions to her. ...read more.

To demonstrate the argument for banning smoking in public I used facts from places where bans have been imposed. I was careful to ensure these facts were simple and would not overload the reader with information. I made an effort to keep my sentences short and therefore easy to read and intake. I think I have been successful in my newsgathering experience. I learnt that it pays to be persistent when trying to find the information you need and especially when attempting to get an interview. In future I may seek a person to person interview rather than conducting it by e-mail. However, in this instance I was specifically looking to interview this person and it was only convenient for her to respond to my questions by e-mail. ?? ?? ?? ?? ...read more.