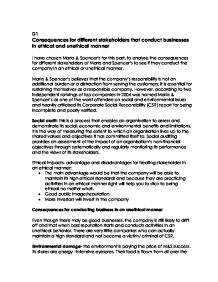 I have chosen Marks &amp; Spencers for this part, to analyse the consequences for different stakeholders of Marks and Spencers to see if they conduct the company in an ethical or unethical manner.

D1 Consequences for different stakeholders that conduct businesses in ethical and unethical manner I have chosen Marks & Spencer's for this part, to analyse the consequences for different stakeholders of Marks and Spencer's to see if they conduct the company in an ethical or unethical manner. Marks & Spencer's believes that the company's responsibility is not an additional burden or a distraction from serving the customers; it is essential for sustaining themselves as a responsible company. However, according to two independent rankings of top companies in 2004 was named Marks & Spencer's as one of the worst offenders on social and environmental issues and heavily criticized its Corporate Social Responsibility (CSR) report for being incomplete and poorly verified. Social audit- this is a process that enables an organisation to assess and demonstrate its social, economic and environmental benefits and limitations. It is the way of measuring the extent to which an organisation lives up to the shared values and objectives it has committed itself to. Social auditing provides an assessment of the impact of an organisation's non-financial objectives through systematically and regularly monitoring its performance and the views of its stakeholders. Ethical impacts- advantage and disadvantages for treating stakeholder in an ethical manner: * The main advantage would be that the company will be able to maintain its high ethical standards and because they are practicing activities in an ethical manner right will help you to stick to being ethical no matter what. ...read more.

In its report are cite 30 ways in which supermarkets exploited their power over suppliers. These included 'requests' for 'over riders' and retrospective discounts, requests for promotion expenses, making changes to contractual arrangements without sufficient notice, late payment of invoices and unreasonably transferring risks from the supermarket to the supplier. Employees-working in M&S stores can be low-pay option too, and conditions are often demanding and physically challenging. M&S is even trailing a scheme to stop workers sick pay on the first three days taken off, as is stands, statutory sick pay only kicks in after the first three days when the company can claim about 80% back from the government In order for M&S to give consumers what they want or is perceived to want, is what M&S will provide and this strategy has been key to its business success since customer needs are in reality, merely comes to an end. After the customers it's the shareholder's needs that must ultimately take priority. M&S and many other supermarkets are committed to conducting business in an ethical and socially responsible manner. This relates to all aspects of business, treating employees, customers, suppliers and most importantly shareholders in a fair and honest manner and ensuring that there are constant and open channels of communication. I personally believe that businesses should aim to treat their stakeholders equally just giving that bit of importance to their shareholders and making sure they get their dividends on time as this will ...read more.

The groups demonstrated that they was an increasing concern amongst Japanese consumers and that falling prices and growing stockpiles of whales meat indicated a significant decrease in domestic demand for the products. The groups pressed M&S to consider this wealth of evidence and end selling whale meat. EIA and green peace met with M&S representatives on two occasions and told M&S the UK's leading retailer to immediately withdraw all whale meat products that were being sold in at least 45 of their supermarket stores in the Tokyo area. More than 20,000 small whales, dolphins and porpoises are also killed in Japans coastal waters. A significant percentage of the cetacean (large sea animals) products on sale in Japan have been shown to be highly polluted, posing a potential health threat to consumers. These groups made statements such as 'contaminated whale products being sold', 'threats on human health' and for reasons alone M&S should stop endorsing such products. Marks & Spencer's took its decision to stop selling whale products shortly after their second meeting, and indicated that it had immediately stopped purchasing whale meat. According to M&S they took the decision "due to lack of customer demand". However in theory, they stopped selling because of high pressure from theses groups who successfully influenced a change in their behaviour, I personally believe that M&S was afraid of losing its population in the market and getting a bad reputation, which clearly tells us that how these stakeholders can have a huge impact in the way you conduct your business. ...read more.