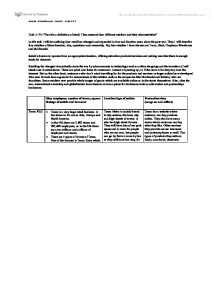 I will be outlining how retail has changed and expanded in size and function areas since the post war. Then I will describe four retailers of there location, size, operations and ownership. My four retailers I have chosen are Tesco, Next, Carphone Warehou

Task 1- P1- "Provide a definition of retail. Then research four different retailers and their characteristics" In this task I will be outlining how retail has changed and expanded in size and function areas since the post war. Then I will describe four retailers of there location, size, operations and ownership. My four retailers I have chosen are Tesco, Next, Carphone Warehouse and McDonalds. Retail is known to operate from an appropriate location, offering attractive products/services and making sure that there is enough stock for demands. Retailing has changed dramatically since the war by advancements in technology such as online shopping and the invention of self check outs in retail stores. These are quick and faster for customers. Instead of queuing up; or if the store is far they buy over the internet. But on the other hand, customers who don't mind travelling far for the products and services as larger outlets have developed. Also new formats have appeared for convenience of the retailers such as the companies like McDonald and Subway who are franchises. Some retailers now provide whole ranges of goods which are available online or in the stores themselves. ...read more.

But these are generally found in neighbourhood areas and are known as convenience stores. Nowadays these have expanded to city centre districts. These are not convenient places for car user so its people who can get there by foot. Tesco Homeplus is located in high streets and shopping centres. Tesco has a website where customer can buy products online. They also have many stores where customer can buy what they like. Other services they provide are car insurance and contract phones as well. The types of products they sell are foods, non-foods, electronic items, clothes, shoes and entertainment goods. Tesco have their own catalogue which sells furniture and electronic which can be purchased through the stores or over the internet. Next PLC Next Retail is a chain of more than 500 stores in the UK and Ireland. It also has Next Directory which is a home shopping catalogue and website with more than 2 million active customers and Next has gone international with more than 180 stores throughout continental Europe, Scandinavia, Russia, the Middle East, India and Japan. They also have an international website serving the USA and over 30 other countries worldwide. ...read more.

McDonald Franchise McDonald's is a global fast food service retailer with more than 32,000 local restaurants serving more than 60 million people in 117 countries everyday. About 75% of McDonald's restaurants are worldwide and owned/operated by local men and women. In McDonald's the restaurant staff total 44,000, restaurant managers 3,000, office staff 500 and franchisees staff is 25,000. Most McDonalds have a seating area and some have floors upstairs. McDonald has a huge amount of turnover of �11 billion pounds. A minimum square feet of McDonalds is 35,000. Some countries have McDonalds with drive thru which is mainly based in high-density city neighbourhoods where customer can easily access as it is nearer to city centre and also located mostly in lower income areas. Some are located within shopping mall and retail parks as they have their own space of their own restaurants. McDonalds don't have facilities for customers to buy online. They have to go to their local outlets and purchase what they want. McDonalds serve the world some of its favourite food and drink such as soft drinks, milkshakes, French Fries, wedges, onion rings, nuggets, salads, wraps and burgers (Big Mac, Quarter Pounder. McChicken Sandwich and Egg McMuffin. They also sell desserts such as apple pies, sundaes and McFlurry ice creams. ?? ?? ?? ?? Jamila Abdulhusein Unit41 Task1-P1 ...read more.