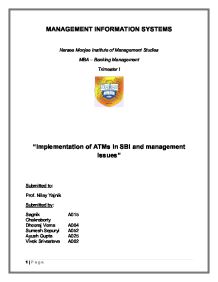 Implementation of ATMS at SBI. Banks in India are looking at deploying biometric ATMs targeted to reach the unbanked population in rural India. Using thumbprint and voice guidance

MANAGEMENT INFORMATION SYSTEMS Narsee Monjee Institute of Management Studies MBA - Banking Management Trimester I "Implementation of ATMs in SBI and management issues" Submitted to: Prof. Nilay Yajnik Submitted by: Sagnik Chakraborty A015 Dheeraj Vema A064 Sumesh Sepuryi A052 Ayush Gupta A025 Vivek Srivastava A062 CONTENTS TOPIC PAGE NO. EVOLUTION OF ATMs 01 ATM HARDWARE 06 ATM ACCESSORIES 09 ATM NETWORKING 11 ATM SWITCH CENTRE (ASC) 12 ATM PROJECT OF THE BANK 14 SERVICE PROVIDERS 18 ATM PURCHASE AND INSTALLATION 20 BRANCH SETUP 23 PRODUCTS AND SERVICES 32 CREDITS 40 VISION Create a large vibrant ATM Self-Service Channel spread across the country that offers a wide range of services to enhance customer convenience and also enable the Bank to attract new customers. EVOLUTION OF ATMs * Introduction The origin of ATMs can be traced back to June 1967 when Barclays Bank installed the first cash dispenser manufactured by Burroughs in the UK. The race commenced when just forty-eight hours later, National Westminster Bank commissioned a machine manufactured by Chubb. Since then, there have been rapid developments both in ATM hardware and software. * The First Generation ATMs The first-generation ATMs basically dispensed cash and offered very limited banking functions. In the next two years, ATMs were installed in several European countries, Japan, and the United States, and the first ATM Network was created in Switzerland. In 1972 Lloyd's Bank in the UK installed the first ATM connected online with their banking system. By the mid-1970s, ATMs with a range of transactional services were developed. * The Second Generation ATMs The next phase (late 1970s to early 1980s) saw the use of micro-computer technology in ATMs which resulted in a number of technical improvements and significant reduction in cost. Consequently, the deployment and usage of ATMs picked up substantially. * The Third Generation ATMs In the mid-1980s modular ATMs were developed, on account of which banks could configure ATMs to suit their specific requirements. ...read more.

To illustrate, the location should be specified as, say, 100 meters to the east or west from the main entrance of the railway station along specified roads, and not general, as, say, X locality (which is a big area), for which the Bank may end up getting an unsuitable location, at a lower rent. * Presence In strategic locations In order not to lose out on visibility, it is desirable to have ATMs located in areas that are already crowded with competitors' ATMs. To illustrate, it may be worthwhile to place ATMs in prominent locations like shopping malls or places of tourist interest which attract large number of people, although other banks too may have put up their ATMs. * Presence in unique locations It is possible that certain locations may not score high on visibility and footfall but it may be important for the Bank to locate an ATM there for strategic business reasons or for image building. This is also acceptable. * Renting of sites � Premium rent: The rent for an ATM site (generally 80 to 120 sq.ft.) in prime locations may be quoted on a lump sum basis and may not be readily comparable with the rent for a branch premises of say 2000 to 4000 sq.ft. in the same locality. In this situation, Circles / Associate Banks may have to consider taking on rent the site at a premium. � Special committees: LHOs may set up Special Committees at LHO /ZOs for taking on rent multiple sites belonging to Circle-wide / Centre-wide organizations / institutions. To illustrate, a state level transport corporation will have bus depots across the State. � Signing on good sites in advance: Some times, the Bank may lose out good sites if it is not taken on rent immediately. Such sites should be signed up even if it means paying the rent for a few months without actually using the space. ...read more.

� Pre and post card lost liability on non-PIN based transactions. � A 24 X 7 helpline to help and hot-list (block) the card in case of loss Documents: � Copies of Passport, � Form A, PAN or Form 60, � Proof of residence if address differs in passport. TPM : Rs 500 per loading/ reloading of USD 1000 or Equivalent. Customers should be educated not to use the card for the following purposes: 1. Payment of hotel deposits, deposits for hiring of cars etc. as the refund of deposits will be credited back to card account only after a period of 60 days. 2. Unauthorized amounts - Only amounts that have been electronically approved by the Bank may be billed i.e. adding tips to restaurant bills after the charge slip has been generated is not permitted. Unauthorized use of Foreign Exchange through the card is not permissible and the card-holder will be fully liable for any such violation. Loss of Card Loss of card in India must be reported immediately to the Call Centre (1800-11- 2211). If it is lost outside India, VISA toll free Global Customer Assistance Service (1- 800-847-2911) should be contacted. In case of loss of card in countries, which do not provide for toll free facility, the customer should make a collect call to 001-410- 581-9994. It is important to note that a Card Lost report will be accepted only after verification. The customer is not liable for transactions on a Card Account only from the moment Card Lost report is registered with the Bank. The customer will, however, be accountable for all damages incurred as a result of transactions made prior to the report of loss. * * * * * Credits We would like to take this opportunity to thank Mr.Nilay Yajnik, our faculty for Management Information Systems for his continuous support and exposure for the completion of this project. We would also like to show our sincere thanks to State Bank Of India for the help and information they provided us with. ?? ?? ?? ?? 43 | Page 1 | Page ...read more.