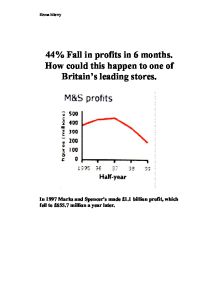 Marks and Spencer's does not gain competitive advantage in this way as they charge quite high prices. Another way that businesses gain competitive advantage is by innovation. Marks and Spencer's uses their relationship that they have with their stakeholders to gain competitive advantage. They are known for having good customer relations as they have a good refund policy. As a lot of jobs have had to be cut Marks and Spencer's employees do not feel secure in their jobs, and so they may not be motivated to work hard. As Maslow's hierarchy (appendix 3) shows, employees need security needs to get to the next step in the hierarchy, which is affiliation needs. These security needs can be gained by long-term contracts, or even by being told that their jobs are safe and a small pay rise could be given. The company have said that they are a loyal Britain as they have always used British suppliers, but to reduce costs they have ended their contracts with suppliers to move to overseas suppliers who are much cheaper. This has angered the GMB union which has lead to an investigation by the office of fair trading. This does not give Marks and Spencer's a good reputation and may have lost them some customers and shareholders. ...read more.

The liquidity ratios for 1998 are lower. This is because the company has invested their money in expansions. In 1999 the liquidity ratio has increased which may have been a result of the money invested in the previous year. This is a good sign as it shows that their investments have paid off. The group financial records (appendix 4) shows that that there is not much off a difference in turnover between 1997and 1999, but there is a very large difference in profits between 1998 and 1999 to such an extent that Marks and Spencer's profits have nearly halved. This would suggest that the costs have radically increased. The increase in costs will mainly bee due to the development of new store. These costs of expansions are shown on the balance sheet under creditors due after more than one year. These have increased from �187.2 million to �772.6 million. The net profit margin has halved from the year 1996 to 1999, but the dividend has steadily increased. The main reason for Marks and Spencer's losing so much profit was length of time that they took to realise that they were not keeping up with fashion and trends. This is what made it very easy for competitor to steal their market share, but they are taking effective steps to regain it consumer confidence and profits. Appendices Appendix 1 Appendix 2 Demand Curve Appendix 3 Maslow's Hierarchy of Needs Hema Mistry ...read more.