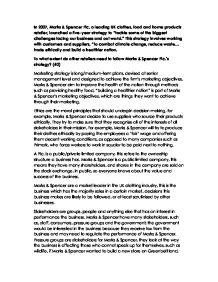 In 2007, Marks &amp; Spencer Plc. a leading UK clothes, food and home products retailer, launched a five-year strategy to tackle some of the biggest challenges facing our business and out world. This strategy involves working with cu

In 2007, Marks & Spencer Plc. a leading UK clothes, food and home products retailer, launched a five-year strategy to "tackle some of the biggest challenges facing our business and out world." This strategy involves working with customers and suppliers, "to combat climate change, reduce waste... trade ethically and build a healthier nation. To what extent do other retailers need to follow Marks & Spencer Plc.'s strategy? (40) Marketing strategy is long/medium-term plans, devised at senior management level and designed to achieve the firm's marketing objectives, Marks & Spencer aim to improve the health of the nation through methods such as providing healthy food, "building a healthier nation" is part of Marks & Spencer's marketing objectives, which are things they want to achieve through their marketing. Ethics are the moral principles that should underpin decision making, for example, Marks & Spencer decide to use suppliers who source their products ethically. They try to make sure that they recognise all of the interests of all stakeholders in their mission, for example, Marks & Spencer will try to produce their clothes ethically by paying the employees a 'fair' wage and offering them decent working conditions, as opposed to many companies such as Primark, who force workers to work in squalor to be paid next to nothing. ...read more.

& Spencer on sourcing ethical products, for example, Marks & Spencer have always had a better reputation for respecting ethics than Primark, it would cost Primark more money and time to improve their ethics to the level that Marks & Spencer have. Budget clothing stores and companies that are not as established as Marks & Spencer, such as Primark or Peacocks will find it harder to become more ethical as they work on small profit margins, becoming ethical would mean their costs are likely to increase, which would take a bigger cut out of their already small profits and maybe bring them down into losses. The fact that the price of budget clothing would go up could cause inflation as there are less cheap goods available, causing cost-push inflation. They will also lose links with cheap suppliers, and this might be seen as unethical because the suppliers would make employees redundant to balance the books. Marks & Spencer will improve their image and popularity through this change, as people will see them as taking the moral high ground, competitors may be falling behind in these terms, they may decide to join to stop getting left behind. Climate change is also another thing the public are considering increasingly, and how industry is affecting it, although clothes may not be ...read more.

products, which means this is a new segment of the market, and people who do not offer this may get left with a smaller market to sell to. It is also important to try to give back to the environment and communities by trading ethically and sensibly, this will help them to stay in touch and not lose ground with the market leader, Marks & Spencer. On the other hand, they cannot do much in terms of climate change, as the technology is not there to reduce the effect, such as carbon emissions from vans, radically; there can only be a small improvement, this may not be seen as worth it, due the fact that it costs a lot of money. It is not advisable for small, new businesses to attempt this as they may not survive the competition, bigger companies are able to use their economies of scale to reduce the average cost to them, thus it will affect smaller businesses more. This is very much a long term project, and businesses need to look to the future and eventually adopt Marks & Spencer's policies, as they will benefit from customer satisfaction, and they can grow and gain market share, which is the main strategy of the business, all other objectives or aims are secondary to this. ...read more.