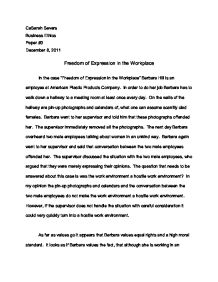 In the case Freedom of Expression in the Workplace Barbara Hill is an employee at American Plastic Products Company. In order to do her job Barbara has to walk down a hallway to a meeting room at least once every day. On the walls of the h

The conversation was gender-based and it was unwelcome to its target (Barbara). I don't disagree with these facts, however this only meets two of the five criteria (criteria 1 and 4) that must be met and the conversation was most likely generated out of anger. The men were merely looking for someone to blame and because Barbara was the one to go to the supervisor she was the one they blamed. As far as we can tell this was the male employee's first offense and one single isolated event doesn't prove sexual harassment or a hostile work environment. As stated earlier the photographs and calendars were probably offensive in nature. It is also possible that they offended other employees, even male employees. With that in mind, although they were inappropriate and offensive, a hostile work environment did not exist because of the photographs and calendars. Even after the offensive material was removed and the two make employee made inappropriate comments, a hostile work environment did not exist. Sexual harassment would be hard to prove, the supervisor no the company perpetuated or condoned the behavior and the harassment was neither severe nor pervasive. The overall workplace was not pervaded with sexual harassment and Barbara was not hindered from doing her job and performing her duties. ...read more.