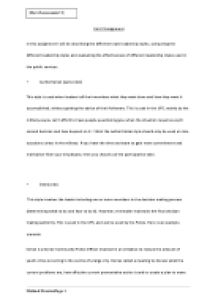 ﻿[Unit 2 assisgnment 1] Unit 2 Assignment In this assignment I will be describing the different team leadership styles, comparing the different leadership styles and evaluating the effectiveness of different leadership styles used in the public services. ? Authoritarian (autocratic) This style is used when leaders tell their members what they want done and how they want it accomplished, without getting the advice of their followers. This is used in the UPS, mainly by the military as you can?t afford to have people questioning you when the situation requires a split second decision and lives depend on it. I think the authoritarian style should only be used on rare occasions unless in the military. If you have the time and want to gain more commitment and motivation from your employees, then you should use the participative style. ? Democratic This style involves the leader including one or more members in the decision making process (determining what to do and how to do it). However, the leader maintains the final decision making authority. This is used in the UPS, and can be used by the Police. Here is an example scenario: Simon is a Senior Community Police Officer involved in an initiative to reduce the amount of youth crime occurring in the centre of a large city. He has called a meeting to discuss what the current problems are, how effective current preventative action is and to create a plan to move forward in achieving the local authority?s goals. ...read more.

7. The leader could manipulate others to engage in unethical or immoral practices and control others for their own personal gain. 8. It creates an environment of power versus perks. Autocratic leadership is an extreme form of transactional leadership, where leader has absolute power over his or her employees or team. Employees and team members have little opportunity for making suggestions, even if these would be in the team or organization?s interest. There similarities are that both have a clear chain of command and both team members have no authority. Team leadership benefits the Public services by: 1. having common goals 2. to work as a team to achieve them goals 3. everybody is aware of the teams standing in pursuit of these goals 4. good team work can achieve better results 5. everybody has their role to play within a structured framework 6. the team has a collective and individual responsibility 7. a share in the rewards These styles of leadership can make team leaders effective in the UPS. For example, using autocratic in the military helps keep the soldiers in control and disciplined and when you?re on the front line you need autocratic. This is because in a life and death situation you don?t have time to stop and have a democratic discussion on what to do, you need to know who is in charge and the exact instructions expected to be carried out. However, leaders need to be able to use a range of styles to suit the situation and topic. ________________ Michael PrestonPage ...read more.