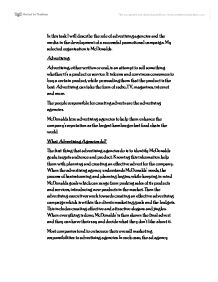 In this task I will describe the role of advertising agencies and the media in the development of a successful promotional campaign. My selected organisation is McDonalds.

In this task I will describe the role of advertising agencies and the media in the development of a successful promotional campaign. My selected organisation is McDonalds. Advertising: Advertising, either written or oral, is an attempt to sell something whether it's a product or service. It informs and convinces consumers to buy a certain product, while persuading them that the product is the best. Advertising can take the form of radio, TV, magazines, internet and more. The people responsible for creating adverts are the advertising agencies. McDonalds hire advertising agencies to help them enhance the company's reputation as the largest hamburger fast food chain the world What Advertising Agencies do? The first thing that advertising agencies do is to identify McDonalds goals, targets audience and product. Knowing this information help them with planning and creating an effective advert for the company. ...read more.

They have special people who work together to create effective promotional campaigns and advertisements. McDonalds Promotion: being one of the biggest hamburger fast food chains in the world and a multi national company, it still needs to do promotions to help boost up sales figures and bring in new customers. The current promotional campaign they are doing is "Easy win Monopoly". This promotional campaign started on the 28th of February 2010. This promotional campaign is aimed at people over 16 and it gives all customers over the age of 16 the chance of winning prizes every time they purchase food from McDonalds. Prizes vary from a fiat 500, �500k Home entertainment system Air tour holidaysNintendo Wii console HG Hair Vouchers They have loads of other prizes as well. In order for customers to win these, they have to go in any McDonald's restaurant to purchase something. ...read more.