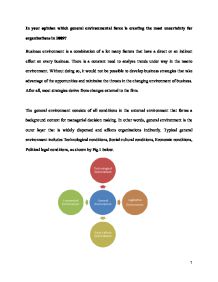 In your opinion which general environmental force is creating the most uncertainty for organizations in 2009? Business environment is a combination of a lot many factors that have a direct or an indirect effect on every business.

In your opinion which general environmental force is creating the most uncertainty for organizations in 2009? Business environment is a combination of a lot many factors that have a direct or an indirect effect on every business. There is a constant need to analyze trends under way in the macro environment. Without doing so, it would not be possible to develop business strategies that take advantage of the opportunities and minimize the threats in the changing environment of business. After all, most strategies derive from changes external to the firm. The general environment consists of all conditions in the external environment that forms a background context for managerial decision making. In other words, general environment is the outer layer that is widely dispersed and affects organizations indirectly. Typical general environment includes Technological conditions, Social cultural conditions, Economic conditions, Political legal conditions, as shown by Fig.1 below. Figure 1 General Environment and its components Research shows that technology can substantially impact an industry's performance. Identifying the commercial potential of technological developments has dramatically accelerated, and the lag between the ideas, invention, and commercialization has decreased. ...read more.

In fact the impact of economical environment can be seen by the fact that Startbucks, the iconic coffee chain, reported that their revenue for fiscal year 2008 fell by 6% and sales have been falling by 9% at many of its stores. As reported in the BusinessWeek ("Starbucks Cuts More Stores and Workers Amidst Recession and Lower Earnings", 2009), they have decided to layoff some 700 corporate and 6000 store employees to cope up with the economic recession that is faced by the world today. Starbucks has eliminated bonuses to minimize as much costs as possible. Even Howard Schultz, CEO of the company, cut his own annual salary from $1.2 million in 2008 to fewer than 10,000 a year in 2009. In order to retain their customers, who have stopped spending on its pricy coffee, Starbucks is coming up with different strategies to attract customers such as offering coffee at different times of the day, especially in the morning and eliminating ready-brewed decaf coffee at afternoon. ...read more.

To keep up with the worsening economic situation 3M is focusing on reducing costs as much as possible and retaining cash. Seeing the impact of economic environment on the operations and strategies of business, it is concluded that economic changes affect the businesses more than any other general environment component. If businesses do not respond to economical changes they will start losing the market and will eventually withdraw. Technological, legal and socio-culture environment also affects the business but the effect of economical changes is more drastic and threatening than any other factor change. REFERENCE LIST Boyd,H.W . Claude,J . Walker,O.C , (2002).Marketing Strategy: Planning and Implementation. Boston: McGraw-Hill Irwin. DePass, D (January 28, 2009). The Winds of Economic Misfortune Struck Hard at 3M Co. Thursday: 3M and Its Workers Feel the Pain of the Slumping Economy and Expect More Trouble Ahead. Star Tribune, Minneapolis, Retrieved from http://www.istockanalyst.com/article/viewiStockNews/articleid/2993508 Helm, B. Kiley, D. (January 28, 2009). Starbucks Cuts More Stores and Workers Amidst Recession and Lower Earnings. BusinessWeek, Retrieved from http://www.businessweek.com/the_thread/brandnewday/archives/2009/01/starbucks_cuts.html IBM is said to cut 5,000 services jobs. (2009, March 26). Boston Globe, p.8. Retrieved from Monash online library database. ?? ?? ?? ?? 1 ...read more.