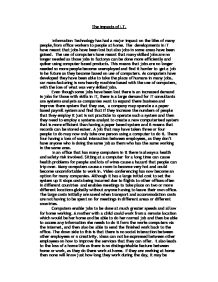 Information Technology has had a major impact on the lifes of many people,from office workers to people at home.

The impacts of I.T. Information Technology has had a major impact on the lifes of many people,from office workers to people at home. The developments in IT have meant that jobs have been lost but also jobs in some areas have been gained. The use of computers have meant that many skilled jobs are no longer needed as those jobs in factorys can be done more efficiently and quiker using computer based products. This means that jobs are no longer needed so more people become unemployed and find it harder to get a job in he future as they become based on use of computers. As computers have developed they have been able to take the place of humans in many jobs, car manufacturing is now heavily machine based with the use of computers, with the loss of what was very skilled jobs. ...read more.

In an office that has many computers in it there is always a health and safety risk involved. Sitting at a computer for a long time can cause health problems for people and lots of wires cause a hazard that people can trip over. Many computers cause a room to become very hot and could become uncomfortable to work in. Video conferencing has now become an option for many companies. Although it has a large initial cost to set the system up it stops costs being incurred due to flights to other offices often in different countries and enables meetings to take place on two or more different locations globally without anyone having to leave their own office. The large costs initially are saved when transport and accommodation costs are not having to be spent on for meetings in different areas or different countries. ...read more.

If they are working at home then none will know just how long they work during the day, it may be possible for them to claim a time that they have worked but in actual fact they worked for a shorter time than they claimed. The internet has made accessing information a lot easier for many people, it also has the down side that it is often not secure and personal information can be accessed by people who you would not wish to have it. If you had bought a product in a internet store the it would be possible for someone to get your credit card details and use it to run up debt on your credit card. If someone can access all your details it may be possible for them to steal you identity they may go around using your name and details. Therefore IT has advantages and disadvantages to the impact of life through its development. ...read more.