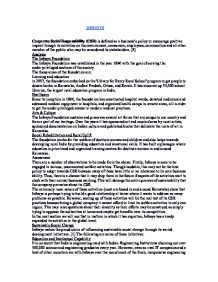 INFOSYS Corporate Social Responsibility (CSR) is defined as a business's policy to encourage positive impact through its activities on the environment, consumers, employees, communities and all other member of the public who may be considered its stakeholders. [8] Analysis The Infosys Foundation The Infosys Foundation was established in the year 1996 with the goal of serving the under-privileged sections of the society The focus areas of the foundation are: Learning and education in 2007, the foundation embarked on the 'Library for Every Rural School' program to get people to donate books in Karnataka, Andhra Pradesh, Orissa, and Kerala. It has since set up 35,000 school libraries, the largest rural education program in India. Healthcare Since its inception in 1996, the foundation has constructed hospital wards, donated medicines and advanced medical equipment to hospitals, and organized health camps in remote areas, all in order to get the under-privileged access to modern medical practices. Arts & Culture The Infosys Foundation sustains and preserves several art forms that are unique to our country and form a part of our heritage. Over the years it has sponsored art and music shows by rural artists, sponsored documentaries on Indian culture and published books that delineate the roots of art in Karnataka. Social Rehabilitation and Rural Uplift The foundation works for the welfare of destitute women and children and also helps towards developing rural India by providing education and vocational skills. It has built orphanages where education is prioritized and organized training centres for destitute women in and around Karnataka. Assessment There are a number of observations to be made from the above. Firstly, Infosys is seen to be engaged in various, unconnected welfare activities. Though laudable, this may not be the best policy to adopt towards CSR because many of these have little or no relevance to its core business ability. Thus, there is a chance that it may drop them in the future if aspects of the activities start to clash with their normal business working. ...read more.

Many of these have been implemented at Infosys itself. Under this initiative of "Green Innovation", Infosys has not only come with a number of ideas but has also implemented some of them in tangible forms: iSustain: Carbon energy and resource management tool that helps the user to generate and monitor the use of various resources such as energy and water etc. being used, take majors to allot them efficiently and also monitor the carbon footprint. InGreen Energy Management: A tool used by Infosys to monitor the energy consumption at micro level and to take majors to cut on unnecessary usage. Using this, Infosys has been successfully reducing its carbon emission at a rate of more than 5% per annum. InGreen Personal Carbon Calculator: A tool that helps the user organizations to assess their impact on ecological systems in terms of carbon emission. Smart Integrator for Smart Grid: A device that continuously monitors the power usage of various devices in the range using a sensor and controls them accordingly. Infosys also plans to become carbon neutral and shift to entirely renewable energy by 2017. The steps taken for the same seem to be promising which include building of renewable energy power generation plants (recently they have built a solar energy plant at Jaipur Campus) and aiming for a platinum rating, the highest rating given by LEED (Leadership in Energy and Environmental Design) for environment friendly architecture. In January 2012, the third building at the Mysore Campus achieved this rating. Besides these, Infosys has been taking small but effective measures to reduce its own energy consumption, such as building designs with maximum exposure to natural light, design of windows which could lead to reduction in room temperature thus saving on air conditioning consumption of energy, increasing use of green power and use of recycled water. (Refer Exhibit 1) Assessment In year 2011, Infosys has saved more than 4 lakh units of conventional energy units through the use of the renewable energy sources. ...read more.

These ratings are calculated by taking the actual impact of reported CSR activities on the ground through the opinions and experiences of both employees and outsiders who are affected by them. Infosys has also consistently maintained this rating over the last four years. However, the rating criteria of Karmayog still have many gaps that need filling. The companies are rated upon criteria divided into Minimum Necessary, Sufficient and Negative without proper justification as to why this is done. Also, the referral method wherein the ratings are discussed with the company itself which can then veto the findings or provide its own views, again leaves too much say in their own hands, thereby skewing the ratings' objectivity. Internationally, indexes like the FTSE 4GOOD Index and the FTSE KLD 400 Social Index have been used to rank companies and they are designed to help investors, who may be socially conscious, to account for environmental and social effects of an organization's activities in their investment choices. A similar Index is also the Calvert Social Index, which is a stock market index created by Calvert Investments. Applying the same indexes in India should be a priority for our authorities as they will provide greater transparency in rating the CSR efforts of organizations. It will also promote companies like Infosys who consciously try to woo investors through their positive CSR activities, to have a firm basis on which to differentiate themselves from their competition in this regard. Thus, if they are sincere in their efforts, an impartially managed index like the above can be of great benefit for Infosys. Meanwhile, the national and international awards that the company has received over its lifetime in the field of social welfare count as a convincing argument in favour of the efficacy of its CSR practices. However, certain issues like narrow scopes of implementation and the numerous unstructured programs need to be sorted out before Infosys can aim for that 5 - Rating on Karmayog and truly be differentiated from others on the basis of CSR alone. Doing so can make it a model for all Indian corporates to follow. ...read more.