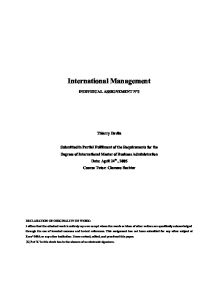 International Management INDIVIDUAL ASSIGNEMENT N�3 Thierry Davila Submitted in Partial Fulfilment of the Requirements for the Degrees of International Master of Business Administration Date: April 24th , 2005 Course Tutor: Clemens Bechter DECLARATION OF ORIGINALITY OF WORK: I affirm that the attached work is entirely my own except where the words or ideas of other writers are specifically acknowledged through the use of inverted commas and in-text references. This assignment has not been submitted for any other subject at Euro*MBA or any other institution. I have revised, edited, and proofread this paper. [X] Put 'X' in this check box in the absence of an electronic signature. 1 In formulating a strategy for the next decade, what are the first steps that KNP should undertake? KNP shall before hand focus on an economic imperative by applying a world wide strategy; That shall find its base on segmentation, differentiation and cost leadership that in the global market should be successful. KNP products are generic, consequently it doesn't have to be sold based on the name brand or support service. This characteristic make it more difficult to develop differentiation that can be used as a competitive advantage; other steps needs to be developed so that KNP should take are addressing the political imperative, emphasizing quality imperative and implementing coordination strategy. In formulating its strategy for the next decade, KNP should consider becoming more global. Before the company goes global, there are many factors the company must determine. The first and most important issue that KNP must consider is the risk that comes along with the potential profit(s) of being a global company. What is the demand/need of KNP's products outside the Netherlands? Who will the company be competing against? Foreign markets for KNP have proven to be a success for the company with their exports to neighboring countries and the development into the European Community. KNP was successful in the expansion into the European Community since language and cultural barriers did not exist. ...read more.

This made the whole process a lot easier." What was the mindset on the US side? You said that there were problems, and they realised that there were problems. Were they very receptive to the idea of a merger? Koffrie: "I think that they were also disappointed. They were originally bigger than we were, and they had a higher value. But their share price had come down by two-thirds or so. I think they had, or at least the CEO had, already put that process behind him. He knew that he had to do something and he realised that you cannot always think about the past. He had to act. So I think he accepted the fact that we would acquire them. But of course the advantage, from his point of view, of being acquired by us, instead of being acquired by another American company, was that they would be able to keep their own presence, their own management, their own office. In fact, operationally, they are better off today than they were before the acquisition. They have also become an even bigger business, because they were able to integrate the ex-Buhrmann business as well. They have now become number one in the USA, from being number two. So, as a market player in the US, they are much better off today than they were before the acquisition." Welding different organisations together Can you describe their culture? Koffrie: "It was in fact a stroke of luck that the culture of their organization was very, very similar to the culture of our American company. That made it much easier to merge them into our company. They had more or less the same history. They had grown by acquisition and then started to integrate the companies they acquired. Much like we do in Europe right now: we have one purchase system, one IT system. They too had countries where they had had the same system, the same process for the last seven or eight years." ...read more.

Koffrie: "That is too strong! What we are trying to do is difficult. First of all, each company has its culture and mentality, but you want to have some type of 'Buhrmann feel' that encompasses everything, a kind of 'sauce' that binds everything together. That is not that easy. You try to develop some kind of family feeling, but then in a positive way. I know that, for some people, money can be important. But belonging to a group is a major motivator, being part of the "Buhrmann family". Review of the interview There is a clear cultural awareness in the organisation and a respect for differences. The merger of Buhrmann and Corporate Express seems to be a classic example of a win-win situation, not through reconciling the differences but by respecting them. Differences in the US were limited and manageable and thus Corporate Express took the lead, with the Buhrmann entities being told to adapt. The European situation is more complex. Diversity is obvious and much more is being done: trying not to be too Dutch, accepting the meeting culture of the host-office, allowing more time for integration and creating the "Buhrmann feel." Real integration is around the 'harder' elements, such as purchasing, IT, etc. However, without forcing any common soft elements, people do share some of the same values simply by virtue of being in the same business and having gone through similar business development cycles. But this is exactly where a clear dilemma is showing up: the present need to hire outside top staff to manage the growth of the company, versus the wish to build the company with internally grown management sharing "intrinsic" company values. The dilemma reflects the tension between the short-term requirements of the company and the need for long-term personal development. It is generated by the fast, non-organic growth of the company. Solving this problem will indeed require a 'better system', a system that will only be successful if it reconciles the short-term with the long-term requirements of the company. ?? ?? ?? ?? International Management Thierry Davila Individual Assignment N�2 Page 2 of 12 ...read more.