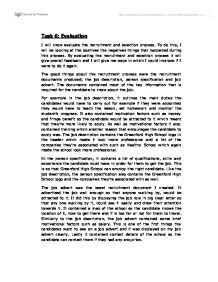 Task 6: Evaluation I will know evaluate the recruitment and selection process. To do this, I will be looking at the positives the negatives things that happened during this process. By evaluating the recruitment and selection process it will give overall feedback and I will give me ways in which I could improve if I were to do it again. The good things about the recruitment process were the recruitment documents produced; the job description, person specification and job advert. The documents contained most of the key information that is required for the candidate to know about the job. For example in the job description, it outlines the main duties the candidates would have to carry out for example if they were appointed they would have to teach the lesson, set homework and monitor the student's progress. It also contained motivation factors such as money and fringe benefit so the candidate would be attracted to it which meant that they're more likely to apply. As well as motivational factors it also contained training which another reason that encourages the candidate to apply was. ...read more.

One major way I could tell was the fact that they didn't offer the candidate a seat to sit on. However there were slight indications that led me to believe they were trained a little. For example, they weren't hesitating when asking the questions. Another reason was that they were well prepared for example they had their interview questions and they arrived early to go over what they were going to do. To get this right, I believe the interviewees need more training. To do this, they could look over sample interview videos so they get more knowledge about how interviews are carried out or by attending more interviews so they get more experience. They would need to get a better understanding of the criteria taken from the job description and person specification I was to overcome this was to give the interviewees training. An example of training I could give them was to give them practice interviews. This way they can get the experience required and also used to it as if they get it wrong, there is no real danger and they can learn from it. I would tell the candidate a week or two before the actual interviewee start; that way they won't forget what to do. ?? ?? ?? ?? ...read more.