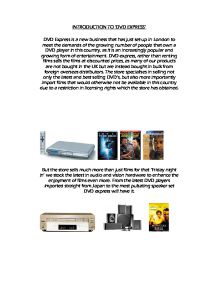 INTRODUCTION TO 'DVD EXPRESS' DVD Express is a new business that has just set-up in London to meet the demands of the growing number of people that own a DVD player in this country, as it is an increasingly popular and growing form of entertainment. DVD express, rather than renting films sells the films at discounted prices, as many of our products are not bought in the UK but are instead bought in bulk from foreign overseas distributors. The store specialises in selling not only the latest and best selling DVD's, but also more importantly import films that would otherwise not be available in this country due to a restriction in licensing rights which the store has obtained. But the store sells much more than just films for that 'Friday night in' we stock the latest in audio and vision hardware to enhance the enjoyment of films even more. From the latest DVD players imported straight from Japan to the most pulsating speaker set DVD express will have it. FEASABILITY REPORT FOR THE STORE As a business analyst I have been recruited to aid the store in setting up an efficient and prosperous business venture. Every business needs an efficient and effective (when practised) plan of action that takes into account all the aspects and factors that will determine the level of success that the business may achieve. The job of a systems analyst is becoming increasingly more in demand, especially today as many large business's and corporations recruit these people to develop or expand their enterprise/ venture. ...read more.

With a logo and professional letterhead created we can begin to build on everything. The creation of the logo and letterhead is one of the foremost priorities before the business is open to the public. Advertising/posters > Suggested Packages: Microsoft Word, Powerpoint, Microsoft Publisher, Paint shop Comments > This step would be done simultaneously/in conjunction with creating the stock database so as to ensure that the store does not get-off to a slow start and that at the same time this advertising scheme is in place once the store is up and running and capable of keeping track of stock. The advertising would initially be used to inform people about the opening of the store and then once the database has been implemented it would be used in other forms such as advertising certain products etc. Stock Control database > Suggested Packages: Microsoft Excel, Microsoft Access Comments > By using a spreadsheet it is possible to keep track of sales and deliveries quickly and efficiently. After this has been implemented all items can be accounted for and the store will be ready to start trade with customers and suppliers. The database must include information such as stock levels, deliveries, number of items sold and stockist information. This system must be implemented immediately if the store is to function properly. Application Form > Suggested Packages: Microsoft Publisher, Microsoft Word Comments > After the database has been set-up the next step is to ensure that the store has some reference to customer information and preferences. ...read more.

The catalogue, paper based or web based must have all the products categorised under the specific heading/page and be linked with the stock control database and reference numbers for products in it. The catalogue would have to be neat, attractive and striking, include illustrations and all the relevant information regarding the products. The catalogue would increase the mail-order business capacity of the store and would be linked with the member's database and order form, which would be included in the catalogue. Information Services > Suggested Packages: Microsoft Word, Microsoft Outlook, Microsoft Publisher Comments > The information service can be utilised in various ways and to compliment various factors of my project. Previous problems were that customers were not kept informed well on developments etc. It could be used in the following ways: * Send out confirmation of joining membership scheme via a letter * An account statement/newsletter sent out periodically * Email offers for those who have given consent to their email address being used. * Confirmation of Order * Problems with order etc The previous points are vital to the running and overall infrastructure. Customers need to and like being informed of recent developments and offers etc. the information service can be used in various ways to provide this service. Emails can be sent to those who consent to it. Membership statements are very important. Order form confirmations could be sent by email or post and would work in much the same way as a mail-merged letter/ template. Various templates could be created for each of the above scenarios and could be linked with various aspects of the project such as the order form and customer database. ...read more.