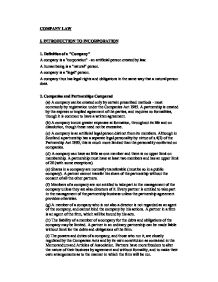 COMPANY LAW I. INTRODUCTION TO INCORPORATION 1. Definition of a "Company" A company is a "corporation" - an artificial person created by law. A human being is a "natural" person. A company is a "legal" person. A company thus has legal rights and obligations in the same way that a natural person does. 2. Companies and Partnerships Compared (a) A company can be created only by certain prescribed methods - most commonly by registration under the Companies Act 1985. A partnership is created by the express or implied agreement of the parties, and requires no formalities, though it is common to have a written agreement. (b) A company incurs greater expenses at formation, throughout its life and on dissolution, though these need not be excessive. (c) A company is an artificial legal person distinct from its members. Although in Scotland a partnership has a separate legal personality by virtue of s.4(2) of the Partnership Act 1890, this is much more limited than the personality conferred on companies. (d) A company can have as little as one member and there is no upper limit on membership. A partnership must have at least two members and has an upper limit of 20 (with some exceptions). (e) Shares in a company are normally transferable (must be so in a public company). A partner cannot transfer his share of the partnership without the consent of all the other partners. (f) Members of a company are not entitled to take part in the management of the company unless they are also directors of it. Every partner is entitled to take part in the management of the partnership business unless the partnership agreement provides otherwise. (g) A member of a company who is not also a director is not regarded as an agent of the company, and cannot bind the company by his actions. A partner in a firm is an agent of the firm, which will be bound by his acts. ...read more.

Any provision in the articles which would have the effect of making them unalterable is void. There are certain restrictions on the company's power to alter its articles: (i) Express Statutory Restrictions s.16 - cannot alter articles to increase a member's liability without his consent. s.369(1) sets out notice periods for calling meetings and states this cannot be shortened by a provision in the articles. (ii) General Law and Public Policy A provision in the articles which is contrary to public policy is void. St Johnstone Football Club Ltd v SFA (Case 38) The same would apply to any provision which was inconsistent with the companies legislation. (iii) Court Order Certain sections of the 1985 Act give the court power to order that no alteration be made to the articles. (iv) Memorandum An alteration to the articles which conflicts with the memorandum would be effectively void. (v) Improper Use of Power to Alter Articles The Power to alter the articles must be exercised bona fide for the benefit of the company as a whole. A member cannot challenge an alteration carried out in good faith for the benefit of the company, even if the alteration adversely affects his own rights. Allen v Gold Reefs of West Africa Ltd (Case 39) Greenhalgh v Arderne Cinemas Ltd (Case 40) The courts will usually allow the alteration, but have sometimes found that it is not bona fide for the benefit of the company as a whole: Brown v British Abrasive Wheel (Case 41) Dafen Tinplate Co Ltd v Llanelly Steel Co (Case 42) 3. Legal Effect of Memorandum and Articles The legal effect is described in s.14 CA 1985. The memorandum and articles operate as a contract between the company and its members, which both parties are bound to honour. The effect of this is: (a) Each member, in his capacity as a member, is bound to the company as if he personally had signed the memorandum and articles. ...read more.

4. Just and Equitable Winding Up Insolvency Act 1986, s.122(1)(g) - a company may be wound up by the court if the court is of the opinion that this would be just and equitable. (a) Locus standii (Who can petition) Any shareholder provided he has had his shares for at least 6 months during the eighteen months prior to bringing the petition, or have inherited them, or have obtained them by direct allotment from the company. (b) "Just and Equitable" This is not defined by the Act - the courts have described it as a broad and flexible concept. "Clean hands" are essential for a s.122(1)(g) petition. (c) Grounds for Granting the Petition (i) Breakdown of Mutual Trust and Confidence Most s.122(1)(g) petitions are brought by members of quasi-partnerships. Court will probably grant the petition if it is evident that the members have lost confidence in each other and can no longer work together: Re Yenidje Tobacco Co Ltd (Case 102) (ii) Exclusion from Management This also applies only to quasi-partnership companies, where the members have a legitimate expectation of taking part in the management of the company. Ebrahimi v Westbourne Galleries Ltd (Case 103) (iii) Lack of Probity of Directors Where shareholders have joined a small family company or quasi-partnership on the basis that it will be managed in a certain way and this has not been done, the petition may be granted where the shareholders have lost confidence in the management. Loch v John Blackwood (Case 104) The court is unlikely to grant a winding up order if the petitioner could have had an equally viable remedy under s.459. Winding up is a drastic remedy. (d) Effect of Presentation of Petition (i) Presentation of the petition freezes the companies affairs while the matter is decided. (ii) The company can apply for a validating order, which will allow it to carry in business pending a decision. (iii) The company can take out a cross-undertaking for damages against the petitioner - the petitioner would then be liable for any loss suffered by the company because of the petition if the petition eventually fails. ...read more.