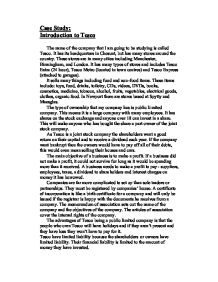 Case Study: Introduction to Tesco The name of the company that I am going to be studying is called Tesco. It has its headquarters in Chesunt, but has many stores around the country. These stores are in many cities including Manchester, Birmingham, and London. It has many types of stores and includes Tesco Extra (24 hour), Tesco Metro (located in town centres) and Tesco Express (attached to garages). It sells many things including food and non-food items. These items include: toys, food, drinks, toiletry, CDs, videos, DVDs, books, cosmetics, medicine, tobacco, alcohol, fruits, vegetables, electrical goods, clothes, organic food. In Newport there are stores based at Spytty and Maesglas. The type of ownership that my company has is public limited company. This means it is a large company with many employees. It has shares on the stock exchange and anyone over 18 can invest in a share. This will make anyone who has bought the share a part owner of the joint stock company. As Tesco is a joint stock company the shareholders want a good return on their capital and to receive a dividend each year. If the company went bankrupt then the owners would have to pay off all of their debts, this would even mean selling their houses and cars. The main objective of a business is to make a profit. If a business did not make a profit, it could not survive for long as it would be spending more than it received. A business needs to make a profit to pay- suppliers, employees, taxes, a dividend to shareholders and interest charges on money it has borrowed. Companies are far more complicated to set up than sole traders or partnerships. They must be registered by companies' house. A certificate of incorporation is like a birth certificate for a company and will only be issued if the registrar is happy with the documents he receives from a company. ...read more.

By 1991, the popularity of Tesco petrol filling stations at its superstores had made the company Britain's biggest independent petrol retailer. In 1985 Tesco introduced its Healthy Eating initiative. Its own brand products carried nutritional advice and many were branded with the Healthy Eating symbol. The company was the first Major retailer to emphasise the nutritional value of its own brands, to customers. By 1990, Tesco was a very different company from what it had been 20 years before. The Tesco superstore offered customers a very wide range of goods, a pleasant shopping environment, free car parking and an emphasis on customer service. Although many financial experts had not believed that the company could so radically change its image, the new approach saw sales and profits rise consistently. Existing customers took advantage of greater choice, and new customers discovered that Tesco could successfully match the offer of any of its retail competitors. In the 1990s, the company built on its success by developing new store concepts and new customer-focused initiatives. In 1992, it opened the first Tesco Metro, a city centre store meeting the needs of high street shoppers and the local community. This was followed by Tesco Express, combining a petrol filling station with a local convenience store to give local communities a selected range of products and in 1997 the first Tesco Extra store opened in Pitsea, an 87,000 sq. ft. hypermarket selling an extensive range of food and non-food. Tesco broke new ground in food retailing by introducing, in 1995, the first customer loyalty card, which offered benefits to regular shoppers whilst helping the company discover more about its customers' needs. Other customer services followed, including grocery home shopping, Tesco Direct for catalogue shoppers and the Tesco Babyclub for new parents, as well as the launch of Tesco Personal Finance a joint venture with the Royal Bank of Scotland. Tesco has seen a steady increase in market share through a customer focused strategy including getting cheaper, offering better value and providing more choice and convenience for customers. ...read more.

Product Offer Typically Tesco sells 40,000 food products in a superstore, as well as clothing and other non-food lines. Tesco sells branded products and own brand products. Our own label products are at three levels, Value normal and Finest products. Own brand accounts for approximately 50% of sales. In 2001/02 we introduced over 3,500 new food lines. Tesco also stocks over 1,100 organic lines. Tesco own brand can now be found in many of the Groups International Stores. Tesco Petrol Tesco is one of Britain's largest independent retailers, with over 340 petrol stations, including Express sites and sells one in every 8 gallons (12.5%) of petrol sold in the UK. Within the next 2 years Tesco/Esso will complete its role out of more than 150 Tesco Express stores. Tesco was the first petrol retailer to introduce low benzene unleaded petrol in line with the Royal Commission on environmental pollution. Tesco Personal Finance Tesco Personal Finance (TPF) was launched in July 1997 and is a joint venture with Royal Bank of Scotland. Products include Clubcard Plus, a grocery budgeting account. A Tesco Visa Card was launched in July 1997, Tesco Instant Access Savings Account in September 1997, Home Insurance in April 1998, Loans in May 1998, Pensions in June 1998, Travel Insurance in July 1998, ISAs in April 1999, Pet Insurance in October 1999 and mortgages in June 2000. The joint venture has over 1 million-customer credit cards and 3m customer accounts. Tesco Personal Finance delivered a profit of �34m of which the Tesco share was �17m in the first half of 2002/03. Tesco.com Tesco is the largest grocery homeshopping business in the world. Annualised sales are �300m and we now cover 95% of the UK population. We already have homeshopping in the Republic of Ireland and South Korea. In June 2001 Tesco took its grocery homeshopping model to the USA through a partnership with Safeway Inc, this has now been rolled out to over 20 stores. Tesco.com also offers online shopping for electrical, books, home entertainment and wine delivered direct to your door. ...read more.