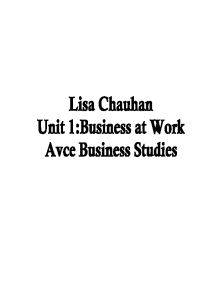 Investigate a medium to large organisation and to write a detailed report on my findings.

Assignment In this unit I will be required to investigate a medium to large organisation and to write a detailed report on my findings. Tesco I have chosen to do my research on Private sector. Plc is owned by shareholders. Shareholders: Shareholders of Tesco are owners of a limited company which stands apart from the business, which is a body in its own rights. If the company goes 'bust' the shareholder is protected by limited liability and does not lose all his or her money, just the money invested. Economic Sector: Tesco is a tertiary industry, because: Tertiary industry: are provided for the benefits of others. They are intangible and they often get used up at the time they're consumed. For example Tesco supply chocolates for consumers but Tesco doesn't collect the raw materials or produces the chocolates in store. Tesco's History 1920s Tesco was founded in 1924. Over the past 79 years, it has changed and now it is Britain's leading food retailer. 1930s It first opened in the USA in the 1930s, during the depression. They soon realised that by selling a wider variety and larger volume of stock, and employing fewer staff, they could offer lower prices to the public. 1960s By the early 1960s, Tesco had become a familiar name. As well as groceries, the stores sold fresh food, clothing and household goods. In which Tesco stores were located in the high streets of many towns. 1980s During the 1980s, Tesco continued to build new superstores, opening its 100th in 1985. In 1987 it announced a �500 million programmed to build another 29 stores. By 1991, the popularity of Tesco petrol filling stations at its superstores had made the company Britain's biggest independent petrol retailer also In 1985 Tesco introduced its Healthy Eating initiative. 1990s In the 1990s, the company built on its success by developing new store concepts and new customer-focused initiatives. ...read more.

Management/ Leadership style Management/leadership style refers to the behaviour, attitude and approaches of managers, towards their employees. There are different types of management/leadership styles and they are: * Autocratic * Democratic * Paternalistic * Laissez-faire (this is not very common) * Proactive * Reactive Styles Behaviour Organisation Autocratic Manager is authoritarian 1. Hierarchical 2. Flat Democratic considerate 1. Flat 2. Hierarchical Paternalistic Treat employees like his or her children 1. Hierarchical 2. Flat Proactive Usually very rude intellectual 1. Matrix 2. Flat 3. Hierarchy Reactive Ploders (not very clever) 1. Hierarchy I believe that my organisation, Tesco management is Democratic, because he is not very rude, he doesn't treat his employees like children and he is not over powering. A Democratic management style means that they make the decision, but can 'consult' in the process. The effect on the Objectives The performance and efficiency of Tesco, (management style) has helped the organisation to achieve it's objectives by..... Oraganisational Culture Organizational culture is the self-image of an organisation. This means that the culture of an organisation is unique. And that it helps to explain the way work is performed: what is acceptable and unacceptable: what behaviour and actions are rewarded and encouraged and what behaviour are discouraged and punished. In general organizational culture is the entire tradition, value, policies, beliefs, and attitudes that lie behind everything an organisation does and thought. The four types of organizational culture are: * Power Culture * Role Culture * Task Culture * Person Culture Type of Culture What it involves Organisation Role 1. Reliance on rules and procedures 2. Tasks are clearly defined 3. A clear chain command Hierarchical Task 1. Tasks or project based 2. No formal hierarchy Matrix Power 1. Strong central figure 2. Decisions taken at the top Company with dominant chairperson Person 1. No formal structure at all 2. Back- up for an individual Professionals e.g. ...read more.

The trays with the meat then have the relevant sauce, vegetables and potato, etc added to them - mostly by machine. They are then wrapped in the film. It is important, however, at this stage that checks are made to ensure that the whole process has been done properly. Substandard products are removed from the production line and checks are made to ensure that no foreign bodies have got into the product. The trays pass through a metal detector, for example! All products are checked for their weight and if they are within the allowed tolerances they pass through to the packaging and distribution area - if not they are rejected. Kettleby Foods use statistical process control (SPC) to check for rejects. SPC is a statistical device to monitor the variations in product quality and process in relation to its targets. Image: Chicken and Broccoli Pies pass through the watchful eyes of a quality checker before having the potato topping added by machine. The staff member can add additional pieces of broccoli by hand if they spot that more is needed. Packaging and Distribution In the packaging and distribution area, the product has the sleeve put over it. It is then boxed up and placed onto pallets. The pallets are then moved to the lorries to go to the distribution depot. Once there, the products will be 'picked' for distribution to the 10 Tesco depots and from there to the stores themselves. At the distribution stage, the central depot will have the information about which stores will require what quantities and therefore which depots will need what. The palletised meals are sent to the main depot, which selects or 'picks' what each regional Tesco depot requires and then distributes those items. Once at the regional depots, the meals are transported to the stores themselves. Image: The final product goes through a metal detector and weighing machine before passing through to the distribution area. Here they have the sleeves put onto them, are boxed up and placed onto pallets to be distributed to the main depot for 'picking'. ...read more.