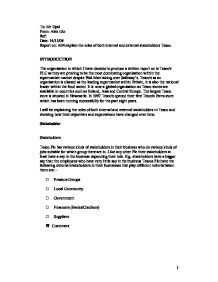 Report on: A04 explain the roles of both internal and external stakeholders Tesco.

The organisation in which I have decided to produce a written report on is Tesco's PLC as they are proving to be the most dominating organisation within the supermarket market despite Wal-Mart taking over Safeway’s. Tesco's as an organisation is classed as the leading supermarket within Britain, it is also the national leader within the food sector. It is now a global organisation as Tesco stores are available in countries such as Ireland, Asia and Central Europe. The largest Tesco store is situated in Newcastle. In 1997 Tesco's opened their first Tesco's Extra store which has been running successfully for the past eight years.

I will be explaining the roles of both internal and external stakeholders in Tesco and showing how their objectives and expectations have changed over time.

Roles of external Stakeholders and their influences

Pressure Groups play a huge part in Tesco Plc as they try and help employees or any other people having problems. (E.g. if 400 employees are sacked, Pressure Groups try and do the right thing by trying to get all the jobs back for people who have lost them).

Trade union Usdaw is to hold talks with management at Boots to discuss today's announcement that 900 jobs are to be lost at its Nottingham head office. We are seeking urgent talks with the company, with a strong emphasis on protecting jobs. Although it was not unexpected, this remains a devastating announcement and represents a huge reduction in workers at Boots' Nottingham head office. We want to hold talks as soon as possible to negotiate on behalf of our members and save as many jobs as we can - and we would hope that there is scope for change to Boots' plans even at this stage (From www.usdaw.org.uk)

This is an example of a Pressure Group called Trade Union Usdaw who are taking immediate reaction on the employees who have lost their jobs at Boots Plc. This shows that they have power and are important for the business. Usdaw who in the past have succeeded in other business when their announced that they have reduced they employment, at this point Usdaw came in and they succeeded in making things right. They have influenced loads of employees and helped them a lot over the years.

Local Community are an important part of society as well to Tesco Plc. Local Community depend on Tesco Plc to provide Employment around their society Local community expects the following things from Tesco Plc are: -

�      People living in Batley and Dewsbury wants Tesco Plc to prevent environmental pollution, noise or any other problems that might affect the local community

Large business like Tesco Plc needs to operate within the community in Batley. Tesco Plc being a large business will provide employment; minority of the money earned will be spent locally. Tesco Plc attracts other business - e.g. suppliers and this will create more jobs. It may also create problems like extra traffic. Sometimes there are laws to cover this, such as not operating noisy machinery between certain hours or not polluting the air and water but this does not apply to Tesco Plc, as they do none of those things. Some businesses are asked to regulates its own activities like car parks etc, but Tescos Plc have never been asked to do this as their car parks comes in the local community’s town car park. Other major businesses contribute directly to the local community’s by sponsoring or other activities, however Tesco Plc don’t do this. The local community welcome Tesco Plc because they bring benefits by providing employment

Government plays a very big part in Tescos Plc for instance if Tesco s Plc wants some information regarding their business they have to respond to the government and also Tesco Plc are legally obliged to pay taxes to the inland revenue which is done through the government. The government have a variety of reasons to be interested in Tesco Plc, and some of them are: -

�     another government agency, which has a duty to collect taxes, is Customs and Excise. It collects added tax (VAT) and also keeps an eye on the financial affairs of Tesco Plc

�     Regional offices collect a wide range of information on business, on behalf of the government and are also run by the government

Tesco Plc is expected by the government to provide the goods and services that the economy needs and also to provide employment. Government expect from Tesco Plc goods to and services to be sufficient and of sufficient quality, to allow the country to trade with the rest of the world and the economy to grow. Government also expect from Tesco Plc to provide employment, which is fair, safe and fairly paid. Employees provide the government with income through taxation.

Tesco Plc must have good relation with their suppliers for preventing conflicts between them. Tescos Plc suppliers want regular’s orders from them as this helps them to be successful and increase their profit and also they want to make their financial position healthy and don’t want to be in debt. They want to supply a business which are reliable and which have a stable income in the business so that they can assure that they will be paid on time.

Customers play an important part in the Tesco Plc, as they are Boots Plc main concerns. It also shows that they are willingly fulfilling customers need and expectations. These include: -

Roles of internal Stakeholders and their influences

�     Opportunities for promotion and a career structure

Owners of Tesco Plc have financial interests in the business.

�     in the long term the owners of Tesco s Plc hope that the share price of the company will rise.

�     Owners of Tesco Plc want to receive large and increasing proportions of the company’s dividends.

�     Owners of Tesco Plc have other interests like international investment because the trade fairly and try to avoid environmental damage.

All the managers of Tesco Plc as well as the directors of Tesco Plc are the company’s stakeholders. Junior employees in Tesco Plc don’t have a bigger say than the mangers that also have a say in how the business is run. Managers expectations are the following: -

�     working in a business that is constantly growing

Managers of Tescos Plc are responsible for the efficiency of running the business. Manager of Tesco Plc has the power to be innovative. The managers can also be responsible for the failure or the success of Tesco s Plc than the owners. It is important that the owners are appointed with care and are properly rewarded for their management abilities. This is why senior managers can attract very high salaries, for their management skills

Most Companies today start up as private limited companies and then go on to something bigger and end up being a public limited company. Manchester took this route and eventually became a PLC. A minimum of �50, 000 in share capital is required before a company can go public, through most they can have considerably more than this.

Tesco is a (plc). A plc as I said above has a share capital of 50,000, which can be issued for sale to the public but must have a plc at its name.

A plc is owned by shareholders, run by directors, set up by a body, which is separate from its owners (the shareholders).

There are advantages in being a public limited company

Below are the advantages:

�   Because of there size Plc`s can often dominate the market

�   Production costs may be lower as firms may gain economies of scale.

�   Creditors may be brought in as experts

�   While the company has the money permanently, the individual owners can recoup there money by selling there shares to others.

There are disadvantages of being a public limited company

Below are the disadvantages:

�   Cost of flotation can be high

�   setting up costs can be very expensive

�   since anyone can buy their shares; it is possible for an outside interest to take control of the company.

�   the way that they operate is controlled various company acts that aim is to protect shareholders.

�   Directors need to report back to the shareholders at the annual general meeting (AGM) where unpopular decisions and poor results must be explained.

�   the accounting of the company is less private than for other forms of organisations. Companies are governed by company’s act, which state that financial records must be audited and made available to register of companies at company’s house.

�   there are a number of legal requirements to fulfil in setting up the company.

Common and conflicting interests of stakeholders

Current and future strategies of the organisation are affected by:

Secondary stakeholders:
Those without whose continuing participation the company can still exist. e.g. the community.

Passive stakeholders
do not normally seek to participate in an organisations policy making. e.g. most shareholders, government, local communities.

Also recently Tescos has grown rapidly there is a lot more interest about Tescos, and there are a lot of people whom wish to invest in the company, as it is always growing.

❖publicising business activities they regard as unacceptable.

❖Political pressure for changes in the law

❖Illegal actions such as sabotage

Employees may want an increase in pay rise. Staffs have a very big interest in Tesco; they have an interest in the business in the form of wages, bonuses, discounts, and holiday pensions. The business may be affected by how well their staffs do in customer service. If a customer experiences poor customer service, it is more like that they will tell someone else that if they got a good customer service. Therefore employees need the right type of customer training in order to be successful to the business.

They regularly meet with non-governmental organizations to understand and respond to issues of concern.

Suppliers are probably the third most significant part in a business, they provide the products and if they are not on time it brings a great threat to the financial state of a business. On the other hand, suppliers aren't that important in decision making because they're scared of losing their contract with Tesco. The main jobs of the suppliers are to sell fresh stock daily at market price.

Investors Tescos Investor Relations team regularly meets analysts from the financial institutions which invest in themselves or represent their shareholders.

Owners In contrast it may want a decrease in pay rise for their employees. You could say that the owners are probably one of the most significant people in a business because they set rules. However, they expect repetitive business profits and respectable customers.

Shareholders objectives are to invest as much capital as they can into the business so when it starts generating profit, they will have large claims. Over a period of time, the shareholders would love to see a growth in their shares, even an increase as little as 10% is still a fair amount, which will keep them very happy.

The shareholders can disagree with internal stakeholders usually managers or directors when they are not generating enough profit and they could pull their investment out they can do this by selling their shares.

I used the OCR national level 3 business books to help me and www.bankofengland.co.uk