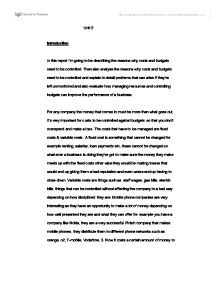 Introduction In this report I'm going to be describing the reasons why costs and budgets need to be controlled. Then also analyse the reasons why costs and budgets need to be controlled and explain in detail problems that can arise if they're left unmonitored and also evaluate how managing resources and controlling budgets can improve the performance of a business. For any company the money that comes in must be more than what goes out, It's very important for costs to be controlled against budgets so that you don't overspend and make a loss. The costs that have to be managed are fixed costs & variable costs. A fixed cost is something that cannot be changed for example renting, salaries, loan payments etc, these cannot be changed so what ever a business is doing they've got to make sure the money they make meets up with the fixed costs other wise they would be making losses that would end up giving them a bad reputation and even worse end up having to close down. ...read more.

Now the story for phone networks when it comes to that very same phone is very different as they have to package out the right deal to make the money they paid out back and not to forget they have fixed costs such as salaries, rent and then also have the variable costs as in your wages and bills, the actual costs is basically the money paid to nokia for the mobile phones so it's a costs that doesn't have any interest towards it as it's a one off payment. The way they make the money is done by controlling the actual costs against their budget, this is done by making sure that the money they spent on actual costs is made back, a good way to make sure that actual costs are kept to a reasonable standard is to keep receipts on items spent on the store and also make sure that the money made by the company is going to meet the budget through the phone deals they give out. Most phone contracts the phone networks give out are 24 months long now the way they make the money depends on how many ...read more.

the company will have money given to them by the budget holders who basically bid for funding sufficient to meet the needs of the company and also makes sure the money thats getting provided is being used appropriately. Budget holders are provided with monthly reports of all expenditure so they are constantly monitoring the company., things such as orders actual costs are always looked at and as long as the company stays within the limit the budget holders will be able to bid for more money for resources e.g computers, software, demo facilities etc. When Preparing a budget from the start you need to have short term reachable goals so money aint spent unnecessarilly, as long as the company is meeting the targets set & stays within the limit the cash flow will be in good health. In any company especially companies that are large the best thing to do is to keep reserve cash as it could be needed for emergencies such as a fire, systems crash and needing replacement or maybe an economic meltdown occurs, if there's no reserves kept it could end up in job losses. ?? ?? ?? ?? Unit 2 ...read more.