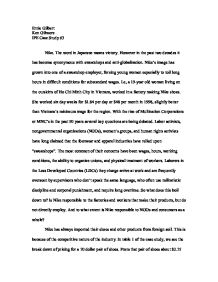 Ernie Gilbert Ken Gilmore IPE Case Study #3 Nike. The word in Japanese means victory. However in the past two decades it has become synonymous with sweatshops and anti-globalization. Nike's image has grown into one of a sweatshop employer, forcing young women especially to toil long hours in difficult conditions for substandard wages. Le, a 19-year old woman living on the outskirts of Ho Chi Minh City in Vietnam, worked in a factory making Nike shoes. She worked six day weeks for $1.84 per day or $48 per month in 1998, slightly better than Vietnam's minimum wage for the region. With the rise of Multination Corporations or MNC's in the past 50 years several key questions are being debated. ...read more.

This is because of the competitive nature of the industry. In table 1 of the case study, we see the break down of pricing for a 70 dollar pair of shoes. From that pair of shoes about $2.75 goes into workers' hands. A common theme runs throughout the very competitive industry of athletic products, branding. Both the largest barrier to entry and the most valued angle of production is this concept of branding. With fads rampant in the developed world your brand name means that much more. This is why $9.25 goes to the research and development, the promotion and advertising, and sales, distribution, and administration of the same 70 dollar pair of shoes (table 1). ...read more.

So what causes the disparity? The nations of Taiwan and South Korea have So who does Nike have responsibility to? In reality anyone who cares about anything that the Nike MNC effects. It was easy to see how NGOs could stir up such distaste with Nike. Therefore Nike had to put in place standards on the factories and their workers or face huge declines in sales as their "image" went sour in the spotlight of global markets. This was the worst thing that could have happened to a company that depends so much on its image to sell its product. Nike is no longer sold in many Colleges because of the action of a few NGOs who wanted to see a change for the better. In the following chart obtained from The Wall Street Journal, February 22, 2001 shows the break down in nine Nike supplier factories. ...read more.