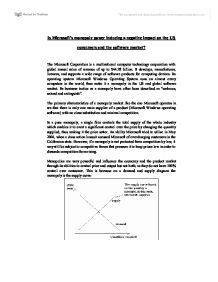 Is Microsoft's monopoly power inducing a negative impact on the US consumers and the software market?

Is Microsoft's monopoly power inducing a negative impact on the US consumers and the software market? The Microsoft Corporation is a multinational computer technology corporation with global annual sales of revenue of up to $44.28 billion. It develops, manufactures, licences, and supports a wide range of software products for computing devices. Its operating system Microsoft Windows Operating System runs on almost every computers in the world, thus make it a monopoly in the US and global software market. Its business tactics as a monopoly have often been described as "embrace, extend and extinguish". The primary characteristics of a monopoly market like the one Microsoft operates in are that there is only one main supplier of a product (Microsoft Windows operating software) with no close substitution and minimal competition. In a pure monopoly, a single firm controls the total supply of the whole industry which enables it to exert a significant control over the price by changing the quantity supplied, thus making it the price setter. An ability Microsoft tried to utilise in May 2004, when a class action lawsuit accused Microsoft of overcharging customers in the Californian state. ...read more.

This Microsoft products dominance, some suggest, would create a monoculture in which is easy for viruses to exploit, resulting in fast and widespread virus infections that have universal effects. It also results in a multitude of people using Windows, which makes the product even more attractive to consumers, and it also means the small to almost non-existent market share of other aspiring competitors makes it prohibitively expensive for them to develop their products into an acceptable substitute for Windows. This then keeps Microsoft's competition to a minimum, which may be good for Microsoft, but it leads to greater, serious long term impact on the software market. These impacts are usually restricted by America's Anti-Trust law. The Anti-Trust laws of USA is set in order to allow companies to compete vigorously against each other, which would then lead them to come out with better products quicker and with lower prices during the competition process. However, because of Microsoft's dominance, it is not as necessary for it to compete so much, so it destroys the company's ability to innovate and improve its products, as they do not need to spend the extra finance on this since they do not have many competitors, this, then lead to slow product development, and ...read more.

However, despite the advantages, it can seem Microsoft's monopoly power's negative impacts outweigh its positive impacts on the US consumers and software market. As already explained Microsoft often abuses this power and influence to raise barrier to entry, and to keep existing competitions minimal. This results in fewer choices for the consumers and reduces market and product advancement produced by competitions between companies. In order to prevent Microsoft becoming too powerful, regulations need to be put upon the company in order to promote fair competition, as shown by several examples of the controversial trials involving Microsoft. The Anti-Trust Law is therefore used to regulate monopolies, with the government able to turn monopolies into publicly owned, or forcibly break it up, as Microsoft came close to during one of its trials. Microsoft is regulated in Europe as well because of abusing of market dominance. In March 2004, the European Union forced Microsoft to produce a Windows Media Player free version of operating system known as Windows XP Home Edition. Clearly then, Microsoft's monopoly power is felt throughout the world and must be controlled in order to promote healthy competition which can benefit the consumers. ...read more.