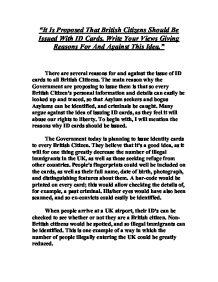 &quot;It Is Proposed That British Citizens Should Be Issued With ID Cards. Write Your Views Giving Reasons For And Against This Idea.&quot;

"It Is Proposed That British Citizens Should Be Issued With ID Cards. Write Your Views Giving Reasons For And Against This Idea." There are several reasons for and against the issue of ID cards to all British Citizens. The main reason why the Government are proposing to issue them is that so every British Citizen's personal information and details can easily be looked up and traced, so that Asylum seekers and bogus Asylums can be identified, and criminals be caught. Many argue against the idea of issuing ID cards, as they feel it will abuse our rights to liberty. To begin with, I will mention the reasons why ID cards should be issued. The Government today is planning to issue identity cards to every British Citizen. They believe that it's a good idea, as it will for one thing greatly decrease the number of illegal immigrants in the UK, as well as those seeking refuge from other countries. ...read more.

and so then they could be easily tracked down. Their fingerprints, personal details and photo, as well as possibly eye/pupil co-ordinates, for example, would also be easily accessible to the police via the ID card and the barcode on it. The person who committed the crime could then, if details are matched correctly, be arrested. Political activists and trouble makers (e.g. Football hooligans) could also be identified. CCTV could help, as the offender's face could be searched for on computer, for example. Their ID details and information could also be on computer on a main database. Another reason why ID cards should be given out is that people gaining national insurance illegally, for example, could be caught. A less important but useful way, could be that police on patrol could check ID cards of people who look as if they should be attending school during school-time (i.e. The people who look younger than they actually are could be asked to show their ID's.) ...read more.

Therefore, most of our personal information would no longer be private. Many also agree that during World War 2, thousands of people fought and died for the UK, just so that every British Citizen could live freely. Issuing identity cards would simply be abusing that freedom that we now have. Another and final reason going against the issuing of ID cards is that fake ID cards could still be produced worldwide, and so the ID card fraud would still continue. Cards could be stolen and/or lost, and so that would become a great problem for many people. In conclusion, I suggest that, although the reasons for having ID cards obviously seem to outweigh the reasons against this idea, it is still not a very good idea to issue the cards. There are very important and strong reasons going against the idea of issuing the cards and I think that unless these reasons are dealt with and solved (e.g. something should be done about the personal information open to abuse issue, and about the fake ID card production business), ID cards should not be issued. ...read more.