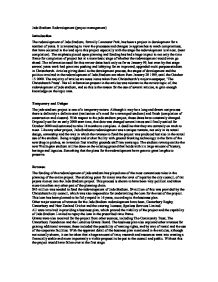 Jade Stadium Redevelopment (project management) Introduction The redevelopment of Jade Stadium, formally Lancaster Park, has been a project in development for a number of years. It is interesting to view the processes and changes in approaches to reach compromises, that have occurred in the lead up to this project especially with the stage the redevelopment is at now, (near completion). The emphasis placed upon planning and funding has had a huge impact to not only the time frame for completion of project but at a more basic stage of whether the redevelopment would even go ahead. The information used for this review dates back only as far as January 99, but even by that stage several years work had gone into pushing and lobbying for an improved, upgraded multi purpose stadium in Christchurch. Articles giving detail to the development process, the stages of development and the politics involved in the redevelopment of Jade Stadium are taken from January 20 1999, until the October 13 2000. The majority of articles are news items taken from Christchurch's major newspaper, 'The Christchurch Press'. Not all information present in the articles was relevant to the review topic of, the redevelopment of jade stadium, and so this is the reason for the use of several articles, to gain enough knowledge on the topic area. ...read more.

Without this the project would have fallen over at the first stage. Stakeholders Because of the nature of the project, the number of stakeholders is huge. Not many in the local or even wider community are exempt from trickle down effects related to the improvements at Jade Stadium. Whether it be on a strictly financial basis or even just from increased enjoyment and easier viewing the majority of Christchurch is affected and are therefore by definition stakeholders. All those involved in the planning of the redevelopment along with those who carry out the redevelopment, the contractors and subcontractors. With that are interest groups; like sports codes who will use the facility. Local business will have a vested interest, for with the improved stadium comes more high profile games, fixtures and people, boosting visitors to the city and with that comes an increase in spending, boosting the local economy. Finally those that own the new stadium, namely the people of Christchurch and Canterbury are also stakeholders. With such a wide spread of stakeholders involved with the project, the Jade Stadium Board, those responsible for the redevelopment, had to consider a diverse range of interests and opinions when designing, planning and carrying out this project. ...read more.

Their role in Closure will be to sign off the project and review results and report back to all stakeholders, namely telling the people of Christchurch how the project went. Conclusion In concluding this review several key points are revealed as well as a defined process in project management. Firstly with such a wide range of articles used to get relevant information some of the points made have been drawn on slight assumptions, this is due to the lack of specific explanation within the text. It must also be considered that the information presented from newspaper articles may only describe a single point of view or side of the story, and that in general all articles relating to the redevelopment of jade stadium, held a more positive slant or position towards the development and the development team. The key points contained within the review begin with defining the uniqueness and temporary nature of a project and how jade stadium is a one off major project. The revenue provided to support such an expensive project comes from a wide and varying plane, with the use of a business plan one of the most important tools in the development of Jade Stadium. It can be noted that a great deal of importance was placed upon the planning phase in order to do it once and do it right. And that the project followed the basic project life cycle model. ...read more.