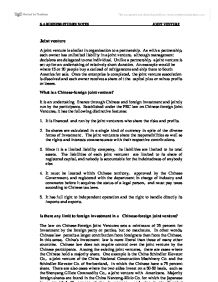 Joint venture A joint venture is similar in organization to a partnership. As with a partnership, each owner has unlimited liability in a joint venture, although management decisions are delegated to one individual. Unlike a partnership, a joint venture is set up for an undertaking of relatively short duration. An example would be where 15 or 20 people buy a carload of refrigerators and ship them to South America for sale. Once the enterprise is completed, the joint venture association is dissolved and each owner receives a share of t the capital plus or minus profits or losses. What is a Chinese-foreign joint venture? It is an undertaking finance through Chinese and foreign investment and jointly run by the participants. Established under the PRC law on Chinese-foreign Joint Ventures, it has the following distinctive features: 1. It is financed and run by the joint venturers who share the risks and profits. 2. Its shares are calculated in a single kind of currency in spite of the diverse forms of investment . The joint venturers share the responsibilities as well as the rights and interests commensurate with their respective contributions. ...read more.

One example is the China Schindler Elevator Co., a joint venture of the China National Construction Machinery Co. and the Schindler Elevator Co. of Switzerland, in which the Chinese have a 75 percent share. There are also cases where the two sides invest on a 50-50 basis, such as the Shenyang Gillete Commodity Co., a joint venture with Americans. Majority foreign shares are found in the China Nantong-Rikio Co. for which the Japanese have provided 60 percent of the investment, and also in the Jianghui Shipbuilding Engineering Co., in which British investment comes to 89.5 percent. The proportions of shares are worked out through negotiations and defined in the joint venture contract. The Chinese government encourages a majority foreign share in cases of a large investment, new technologies are brought in by the foreign participants, and the likelihood of increasing exports. What is the nature of the capital structure of a Chinese foreign joint venture? A joint venture if constituted as a limited liability company. Its assets consist of the shares contributed by the shareholders. Each investor is accountable for the liabilities of the venture only to the extent of his capital subscription. ...read more.