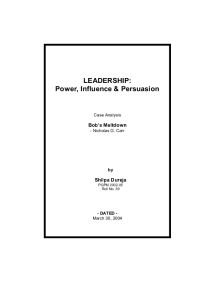 Bob's Meltdown - Nicholas G. Carr Case Overview Annette Innella is just coming into the lunchroom at Concord Machines when Bob Dunn starts screaming at her. After throwing his lunch tray against the wall, he stomps out, leaving Annette stunned. Naturally, Annette, the new senior VP for knowledge management, is beside herself. She knows her proposal to establish a cross-functional knowledge management committee is progressive thinking for this old-line manufacturer, but Bob's reaction is totally over the line. If Bob stays, she goes--that's all there is to it. Bob is contrite, but he's under a lot of pressure. The general manager of the Services Group, he's just returned from a two-week trip around the globe to gear up his troops to beat revenue targets again, despite shrinking budgets and hiring freezes. Then an e-mail from Annette requests that two of his best people devote half their time to what he calls her "idiotic" Knowledge Protocols Group. CEO Jay Nguyen is in a bind. Bob is his top manager--he brings in all the money. And even though future revenues are going to have to come from somewhere else, Jay is not totally behind Annette's initiative in the current business climate. ...read more.

With Annette he must first clear the miscommunication that arose of his acceptance of proposal of acceptance of her proposal for establishing knowledge management committee - Knowledge Protocols Group and then hear her views. He must empathize with her and share her shock and disappointment at Bob's behavior and learn her thoughts on possible legal action, if any she intends to take up to put his worries at rest for a lawsuit. Jay must also plan events such that Annette can have a thorough orientation to the business, covering company's entire value chain and meetings with other VP's only if he's sure of Annette as the ideal resource for Knowledge Management VP. In his meeting with Bob, who already has had a realization of his mistake and unacceptable behavior, Jay must lend a patient hearing and show concern about this work pressures and commitment to organizational goals. At the same time, he must judge Bob's acceptance for a public apology for his misconduct since the incident had dotted the defined work ethics and culture at the company. He must also explain to Bob risks the company faces as a result of his actions, and he needs to persuade Bob for an apology in-person and in public. ...read more.

At the same forum, Jay must share his share with his executive team fundamental issues about the company and its future. He must use this forum to share his thoughts and concerns with the top management team and ask them to set up exampling roles for the staff. For a company under operating pressures Jay must work towards striking a balance in its long-term strategic initiatives and current realities. Similarly, he must sit with Annette to chart out the scope and processing of the knowledge management initiative before hand and share his plans with the team. He must work as a transformational leader focusing development of trust, confidence, admiration, loyalty and commitment among his team and aim towards setting a direction for the company, aligning its people rather than organizing and staffing and motivating people rather than involve himself with controlling and problem-solving. More so, he must set the ball rolling for creating a culture of leadership within the company. His management team must work towards managing diversity on thought and perspective and use the differences within leadership groups as a source of strength that can be harnessed in a productive way. Finally Jay must institutionalize a leadership-centered culture as an ultimate act of leadership. Bob's Meltdown Case Analysis 2 By Shilpa Dureja Roll No. 39, PGPM 2002-05 ...read more.