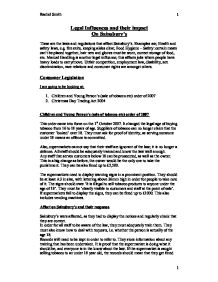 Legal influences and their impact on Sainsburys Plc

Legal Influences and their impact On Sainsbury's These are the laws and regulations that affect Sainsbury's. Examples are; Health and safety laws, e.g. fire exits, keeping aisles clear, Food Hygiene - Safety: certain meats can't be placed together, hair nets and gloves must be worn, correct storage of food, etc. Manual Handling is another legal influence; this affects jobs where people have heavy loads to carry/move. Unfair competition, employment law, disability, s*x discrimination, race relations and consumer rights are amongst others. Consumer Legislation I am going to be looking at: 1. Children and Young Person's (sale of tobacco etc) order of 2007 2. Christmas Day Trading Act 2004 Children and Young Person's (sale of tobacco etc) order of 2007 This order came into force on the 1st October 2007. It changed the legal age of buying tobacco from 16 to 18 years of age. Suppliers of tobacco can no longer claim that the customer 'looked' over 18. They must ask for proof of identity, as serving someone under 18 means an offence is committed. Also, supermarkets cannot say that their staff are ignorant of the law; it is no longer a defence. All staff should be adequately trained and know the law well enough. Any staff that serves customers below 18 can be prosecuted, as well as the owner. This is a big change as before, the owner would be the only one to take the punishment. They can be also fined up to �2,500. The supermarkets need to display warning signs in a prominent position. They should be at least A3 in size, with lettering above 36mm high in order for people to take note of it. The signs should state 'It is illegal to sell tobacco products to anyone under the age of 18'. They must be 'clearly visible to customers and staff at the point of sale'. If supermarkets fail to display the signs, they can be fined up to �1000. ...read more.

Full redundancy will be received by anyone that is recruited up until his or her 65th birthday. - They have an age diversity policy, which includes career breaks, flexible working and flexible pensions. These are all important to a mature workforce. They hope it will attract the right candidates. By carrying out good practice, Sainsbury's mixed aged workforce has led to: * Improved customer satisfaction as the workers better reflect the profile of their customers. * A workforce that is more flexible. * A workforce that is better motivated that feels more valued and more willing to contribute to the success of the business. * Increased productivity so reduced business costs. * A workforce where 14.7% are over the age of 50, and 1.2% over the age of 65. * Having an active colleague in their 90s and also colleagues in their 50s on their management training schemes. Therefore, the company find the move to employing more mature workers beneficial to the company as different age groups can relate better to one another and it keeps customers satisfied with the service they are receiving. Older people prefer someone of a similar age to them to serve them, and young people prefer this too. Data Protection Legislation I am going to be looking at: 1. Data Protection Act 1998 2. Privacy and Electronic Communications Regulations 2003 Data Protection Act 1998 This act has been created in order to replace the Data Protection Act 1984. The 1998 Act has also replaced the Access to Personal Files Act, 1987, as well as some sections from other acts. This is because they were only basic. They only covered electronically stored data. The act has now been extended so that data should be kept in 'relevant filing systems'. This could mean either electronic or paper based. Businesses should follow eight main controls put into place by the Data Protection Act 1998: 1. ...read more.

Monitoring the company to ensure that it is continuing to meet requirements As said before, Sainsbury's are required to keep a logbook showing the refused cigarette requests. This is used as proof and will be used if anyone external comes into the store. It shows that the supermarket are in fact applying the rules and doing what is necessary to prevent illegal purchases of tobacco. None of the legislation has a huge impact on the company. Because the company is a relatively large one, they will be easily able to cope with the costs of making changes to their stores. Therefore, they won't be affected very much financially. The company see themselves as 'proactive', whereby they are continually making changes to their company, without being told to. They are planning ahead both in the short and long term. The management will work closely with their staff in order to determine potential problems and opportunities for development. Sainsbury's believe that they provide excellent customer service and operate way above the bare minimum. They think that they operate at a higher level than the legal requirements. Therefore, this makes their job a lot easier when it comes to making changes, as many would have already been made, as Sainsbury's are way ahead of other supermarkets in this area. It means that they don't see the changes as substantial as other competing supermarkets might do. The company believe in much of the legislation described in this assignment. They find that the Age Discrimination Act has benefited their company greatly since being introduced. They benefit from employing older people. This is because of the relationship between the customer and the employee. Different types of people liked to be served by people similar to them as they can engage better in conversion. Therefore, Sainsbury's have to cater for all ages. They do this by employing older workers as well as young. The company say that the laws make Sainsbury's a better company overall. It allows them to further develop and gain new customers. ...read more.