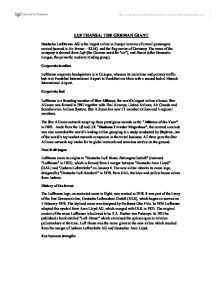 LUFTHANSA: THE GERMAN GIANT Deutsche Lufthansa AG is the largest airline in Europe in terms of overall passengers carried (second is Air France - KLM), and the flag carrier of Germany. The name of the company is derived from Luft (the German word for "air"), and Hansa (after Hanseatic League, the powerful medieval trading group). Corporate location Lufthansa corporate headquarters is in Cologne, whereas its main base and primary traffic hub is at Frankfurt International Airport in Frankfurt am Main with a second hub at Munich International Airport. Corporate feat Lufthansa is a founding member of Star Alliance, the world's largest airline alliance. Star Alliance was formed in 1997 together with Thai Airways, United Airlines, Air Canada and Scandinavian Airlines System. Star Alliance has now 21 member airlines and 3 regional members. The Star Alliance network swept up three prestigious awards as the "Alliance of the Year" in 2003. Aside from the US and UK "Business Traveler Magazines", the coveted accolade was also accorded the world's leading airline grouping in a study conducted by Skytrax, one of the world's top market research companies in the travel business. All three gave the Star Alliance network top marks for its global network and seamless service on the ground. ...read more.

Furthermore, Lufthansa Cargo markets the belly capacities of all of Lufthansa's passenger fleet as well as the capacities of Jade Cargo International from Europe. The Lufthansa Cargo route network includes about 360 destinations worldwide which are served by cargo and passenger aircraft as well as by contracted trucking companies. The bulk of air cargo is handled at the Lufthansa Cargo Center at Frankfurt Airport, Lufthansa's main hub. The company also operates hubs at Munich and Leipzig. Lufthansa Cargo's service portfolio covers all three air cargo product segments: Standard, Express and Specials, for example for the transport of temperature-sensitive products, live animals or valuable items. Lufthansa Cargo also offers additional logistics services which fully complement and augment its core airfreight business. Catering The LSG Sky Chefs group is the world's leading provider of in-flight catering services and has a global market share of about 30 per cent. It encompasses around 119 companies and has almost 200 facilities in 47 countries. The group is divided into two business segments: "Airline Catering", which supplies airlines worldwide with food, drinks and other inflight items, and "Inflight Solutions", which together with the "Airline Catering" segment offers related services and products and supports airlines in all aspects of inflight service. ...read more.

* Embraer 190: (30 on order- Wich 6 of them are planed for Air Dolomiti) Lufthansa Cargo The Lufthansa Cargo fleet consists of the following aircraft: * McDonnell Douglas MD-11F: 14 * McDonnell Douglas MD-11SF: 5 Future approach 1. Investment in environmentally compatible and modern fleet (35 new aircraft orders) 2. Investment in environmental measures 3. Lufthansa Aviation Center in Frankfurt 4. Strengthening of position in the future market in China 5. New First and Economy-Class on long-haul routes 6. Expansion of premium passenger traffic 7. New ground products (boarding card print-outs on home PCs) Lufthansa pursues flying towards success. The Company is growing steadily more attractive, as is demonstrated impressively by the continuous growth of encouragement of all stakeholders. Our strategy is working. In financial year 2007 we boosted our operating profit by 63.1 per cent to EUR 1,378m, and we take pride in the fact that this result was driven by both cost management and higher revenue. Lufthansa continues to grow and is increasing profitability. We have further enlarged our sound financial base and at the same time engaged in forward-looking capital expenditure. Your company's economic result is by no means all that it has to show for itself either. The Lufthansa brand is stronger than ever. ...read more.