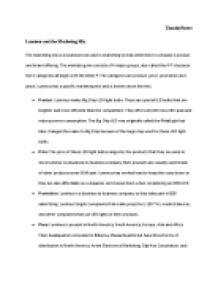 Luminus and the Marketing Mix. Luminus makes Big Chip LED light bulbs. These are special LED bulbs that are brighter and more efficient than the competition.

﻿TimothyPotter Luminus and the Marketing Mix The marketing mix is a business tool used in marketing to help determine a company?s product and brand offering. The marketing mix consists of 4 major groups, also called the 4 P?s because the 4 categories all begin with the letter P. The categories are product, price, promotion and place. Luminus has a specific marketing mix and is broken down like this: 1. Product: Luminus makes Big Chip LED light bulbs. These are special LED bulbs that are brighter and more efficient than the competition. They offer a 20,000-hour life span and reduce power consumption. The Big Chip LED was originally called the PhlatLight but later changed the name to Big Chip because of the large chip used for these LED light bulbs. 2. Price: The price of these LED light bulbs ranges by the products that they are used in. since luminus is a business to business company their products are usually used inside of other products as an OEM part. ...read more.

Constant innovation is very important to Luminus because LED lighting is a relatively new technology and companies are getting closer and closer to perfecting it. One suggestion that our group has for Luminus is to improve the company?s website. The website is currently very simple and could go in to further depth with its products and technology categories. The website does not currently have a customer review or recommendation section which could help Luminus when people are initially researching the company. There should also be a part of the website that shows the current applications that Luminus puts it?s LED light bulbs into. In this section there should be videos showing the products being used and possibly comparing them to other products that might not be as good as Luminus. Another suggestion we have for Luminus is to increase the amount of LED light bulb applications. We believe that anything that uses a light bulb should be using a Luminus LED light bulb because they last longer, use less energy and are brighter when using less energy. ...read more.

Using Luminus LED light bulbs in all of the projectors would save the University money and use less energy. Our second recommendation is for the University and the entire town of Whitewater to begin using Luminus LED light bulbs for all of the street lights. This would help the roads in a lot of ways, it would make them safer by providing more light than traditional street lights, save money on replacement, and use less energy. LED street lights are brighter than traditional street lights and provide a specific color light that makes driving in the dark in rain a lot easier and safer. Currently the city has dimmed the street lights to save money, this is dangerous because while saving money for the city it is putting night time driving at more risk of an accident with another car or with a pedestrian. Using Luminus LED bulbs would use less energy and save money for the city. They would also need to be replaced less than traditional bulbs so it would cost the city less for bulbs and replacement costs. ...read more.