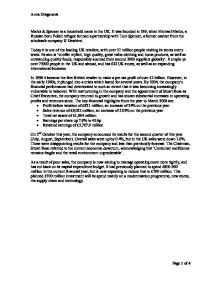 Marks & Spencer is a household name in the UK. It was founded in 189, when Michael Marks, a Russian born Polish refugee formed a partnership with Tom Spencer, a former cashier from the wholesale company IJ Dewhirst. Today it is one of the leading UK retailers, with over 21 million people visiting its stores every week. Its aim is 'to offer stylish, high quality, great value clothing and home products, as well as outstanding quality foods, responsibly sourced from around 2000 suppliers globally'. It employs over 75000 people in the UK and abroad, and has 622 UK stores, as well as an expanding international business. In 1998 it became the first British retailer to make a pre-tax profit of over �1 billion. However, in the early 1990s, it plunged into a crisis which lasted for several years. By 2004, the company's financial performance had deteriorated to such an extent that it was becoming increasingly vulnerable to takeover. With restructuring in the company and the appointment of Stuart Rose as Chief Executive, the company returned to growth and has shown substantial increases in operating profits and revenues since. ...read more.

Dividends on cumulative preferred shares must be paid, despite the earning levels of the business. * Redeemable - these are shares the company sells but the agreement to be bought back in certain time. * M&S might sell more shares to their already existing shareholders with discount so the company will raise funds. > Factoring debts - this is when the company has customers who are not paying for the purchases for really long time or that are refusing to pay. Then the company might decide to sell these debts to a specialist debt-factoring company against amount of money. In this way the company will raise immediate funds. For example M&S has many customers who are not paying their purchases or refusing to pay them in really long time - that is a problem for the company because they are loosing stock and not receiving income. M&S might decide to sell that debt to a specialist company for certain amount of money, and that company is taking over the problem customers. In that way M&S receives immediate funds and does not have any customers that are in debt. ...read more.

In general the company will be able to raise money with internal methods rather than external. There are different circumstances that a bit company might need to raise money. * One of the cases that company will need to raise great fund is when they want to take over of another company. The buying company will need the money to take over the other company to refurbish it and to introduce to the customers new image in order the new company to be successful. Good example is when Morrisons took over Safeway * If a company decided to expand via opening new stores in better places or even in different countries there will be need of raising funds to do so. This process takes times and mostly HR and Marketing work which both need financial help in order to do their job. * To increase their investments opportunities through putting more shares on sale in the stock market * Introducing new image of the company, new products/services, having goal to make the company better knowing brand all these objectives/goals need great funds. Example is McDonalds when they started to introduce new better image of the company with comfortable chairs, introducing new meals and promoting better healthier food . 1 http://www.londonstockexchange.com/en-gb/pricesnews/prices/system/detailedprices.htm?sym=GB0031274896GBGBXSET13127489MKS 2 http://www.the-debt-clinic.co.uk/DebtNews/All_You_Need_to_Know_about_the_Credit_Crunch_200710413733 3 http://news.bbc.co.uk/1/hi/business/7647697.stm ?? ?? ?? ?? Anna Draganova Page 1 of 4 ...read more.