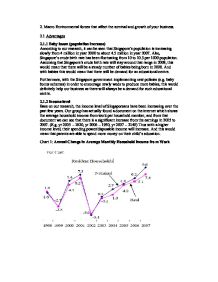 2. Macro Environmental forces that affect the survival and growth of your business. 2.1 Advantages 2.1.1 Baby boom (population increase) According to our research, it can be seen that Singapore's population is increasing slowly from 4 million in year 2000 to about 4.5 million in year 2007. Also, Singapore's crude birth rate has been fluctuating from 10 to 10.3 per 1000 population. Assuming that Singapore's crude birth rate will stay around that range in 2008, this would mean that there will be a steady number of babies being born in 2008. And with babies this would mean that there will be demand for an educational centre. ...read more.

Chart 1: Annual Change in Average Monthly Household Income from Work 2.1.3 Government Policies The government has implemented a few policies in order to encourage Singaporeans to give birth to more children. Policies such as the "Baby Bonus Scheme" and longer maternity leave for pregnant woman, Infant Care Subsidy and the setting up of the WoW! (Work-life Works!) Fund. With these policies, more people will be enticed to have babies in order to receive the benefits that the government has laid out for the public. 2.2 Disadvantages 2.2.1 HFMD/Sars/Bird Flu (Communicable Diseases within Children) In the event of a breakout of HFMD/SARS/Bird Flu, all children related places will have to exercise caution and if there is a student who has any of the above illness, then our enrichment centre will be forced to shutdown for a period of time. ...read more.

2.2.3 Competiton There are many children education centres (E.g. Mindchamp, Super Kids, Tony Buzan Learning Centre), that have the same target market as us. Over the years, there has been an increase in the number of children education centres in Singapore. This has a negative effect on us because parents will now have more choices to choose from and decide which best fits their child. .2.4 Rise of prices According to our research, it can be seen that food prices will increase and this would mean that Singaporeans will have to put aside a larger portion of their disposable income for their grocery shopping. Which in turn means that there will be lesser money spent on sending a child to an educational centre. Resulting in the parent settling for a cheaper educational centre. Links Used http://www.singstat.gov.sg/stats/themes/people/hist/popn.html http://www.singstat.gov.sg/stats/themes/people/demo.html http://www.singstat.gov.sg/pubn/papers/people/op-s14.pdf http://www.singstat.gov.sg/pubn/hhld/hes2003.pdf http://www.family.sg/GOVLINK/2006/06/27/en-us/0000026/article.aspx http://app.mcys.gov.sg/web/corp_press_story.asp?szMod=corp&szSubMod=press&qid=453 http://www.iht.com/articles/2008/04/29/asia/sing.php?page=2 http://news.xinhuanet.com/english/2008-05/01/content_8087398.htm http://money.cnn.com/news/newsfeeds/articles/newstex/AFX-0013-24642411.htm http://www.asiaone.com/static/health/hfmdfaq.html http://app.sprinter.gov.sg/data/pr/20080526985.htm ...read more.