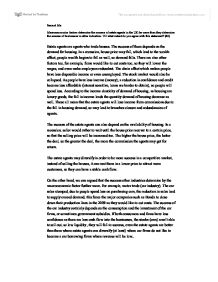 Estate agents are agents who trade houses. The success of them depends on the demand for housing. In a recession, house price may fall, which lead to the wealth effect, people wealth begins to fall as well, so demand falls. There are also other factors too, for example, firms would like to cut costs too, so they will lower the wages, and even make employees redundant. The chain effect which makes people have less disposable income or even unemployed. The stock market would also be collapsed. As people have less income (money), a reduction in confidence and credit become less affordable (interest sensitive, loans are harder to obtain), so people will spend less. ...read more.

On the other hand, we can argued that the success other industries determine by the macroeconomic factor further more. For example, motor trade (car industry). The car sales slumped, due to people spend less on purchasing cars, the reduction in sales lead to supply exceed demand, this force the major companies such as Honda to close down their production lines in the 2009 as they would like to cut costs. The success of the car industry certainly depends on the consumption and the investment of the car firms, or sometimes government subsidies. If both consumers and firms have less confidence as there are less cash flow into the businesses, the stocks (cars) ...read more.