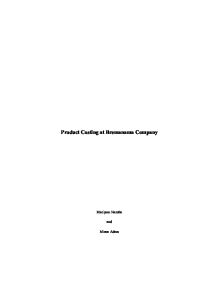 Product Costing at Bremanama Company Mariyam Nazaha and Mizna Adam CONTENTS Introduction 3 Current Situation 3 Activity Based Costing 5 Product Costs under ABC 6 Adopting ABC Costing at Bremanama 8 Recommendations 8 Appendix 1 10 Appendix 2 11 Product Costing at Bremanama Company Introduction This study analyses the reasons for the declining profits of Bremanama following the introduction of the Large Model of their product. The report highlights the shortcomings of the current costing method in product pricing and looks at the more modern Activity Based Costing (ABC) as a possible way to better understand the unit costs which would in turn enable Management to better price the different products appropriately in order to maximise the revenues and profits of the company. This report will also address the limitations of ABC and the issues that need to be considered in moving to ABC. Current Situation Bremanama currently uses the traditional costing method for external reporting as well as internal decision making purposes. In traditional costing, costs are separated into three fundamental categories; direct materials, direct labour and overhead, containing all other costs. Within overhead maintenance, utilities, supervision, equipment costs, supplies and floor space costs such as building depreciation and rent is included. In calculating profit, some companies regard both the manufacturing costs and other costs including administration as "costs" while some only consider manufacturing costs. While the material and direct labour costs can be easily traced to specific products, it is difficult to determine the amount of overhead consumption of a product. ...read more.

The activity based costing accumulates the costs into activity cost pools. These cost pools largely correspond to the major activities of the business and they are caused by a single factor known as the cost driver. The activity based method allocates costs to products based in relation to the cost driver of the activity. In this method of costing they take manufacturing and non-manufacturing costs into account. When assigning the manufacturing costs to the products, activity based costing sees whether decisions concerning the product bring about changes to the cost, assigns costs that are relevant to the product. As this method is able to align costs with the corresponding cost drivers it gives precise information to help managers in making decisions relating to the products. Bremanama's Management having recognized the limitations of its current costing method and the advantages of ABC is considering the introduction of ABC. The following preliminary work has already been done. The activity-based costing system at Bremanama would have the following four activity cost pools: Estimated Activity Cost Pool Activity Measure Overhead Cost (RM) Purchasing Purchase orders issued 204,000 Processing Machine-hours 182,000 Scrap/rework Scrap/rework orders issued 379,000 Shipping Number of shipments 135,000 Expected Activity Activity Measure Large Medium Purchase orders issued 200 400 Machine-hours 20,000 15,000 Scrap/rework orders issued 1,000 1,000 Number of shipments 250 650 Product Costs under ABC Appendix 2 shows the Bremanama's manufacturing overhead per unit and the revised unit costs for the two models under ABC, calculated using the above data. ...read more.

Compared to the traditional costing system ABC is more complex and a dedicated team and the co-operation of relevant staff throughout an organization is needed to develop and put into operation an ABC system. Moreover interpreting the accumulated data requires a lot of time and dedication. Some of the ABC systems do not agree with the generally accepted accounting principles. Recommendations Based on this study the following recommendations are proposed for Management's consideration. 1. The current system of using the direct labour to allocate manufacturing overhead to the two models is inappropriate and leads to gross underestimation of the unit cost for the Large Model and overestimation of the cost of the Medium Model. It is recommended that Bremanama move to Activity Based Costing as soon as possible. 2. Investigate the reasons for the high machine hours taken per unit of the Large Model and find possible ways to reduce it. Possibility of minor design changes should also be considered, if necessary. 3. Investigate the reasons for the high scrap/rework order rate for the Large Model and find ways to reduce it. 4. Increase the selling price of the Large Model considering the higher unit costs. Prices should be adjusted so that both models are profitable and Medium Model does not subsidize the Large Model. The extent to which price can be increased will depend on the customer profile and the availability and price of competing products. 5. Discontinue production of the Large Model if the price of the Large Model cannot be increased and/or production costs reduced to make it profitable. Appendix 1 Appendix 2 ...read more.