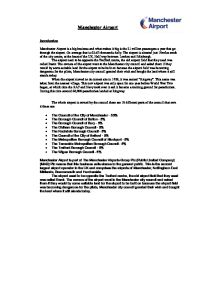 * Director's Report * Auditor's Report * Statement of accounting policies * Profit and Loss Account * Balance Sheets * Cash Flow Statement * Notes to the Financial Statements * Employees Costs - Due to the seasonal nature of operations staffing levels in many companies at the Airport vary throughout the year. IN the busy summer months extra staff are employed on short-term contracts, a number of whom are part-time to cover the peak travel times between 6am and 9am and again at 5pm and 8pm. * Fixed Costs - The fixed costs of an organisation remain the same whatever the level of business. For the Airport this means that costs such as insurance, business rates and telephone line rental are the same whether there are 20,000,000 or 2,000,000 passengers. It is therefore prudent to attempt to minimise these costs as much as possible and to maintain a careful check each year to ensure that fixed costs do not increase dramatically. * Variable Costs - Some organisational costs are dependant upon the amount of business activity. For example, more flights out of the Airport mean that more aircraft fuel will be needed; more passengers mean more refreshments are required. Such costs are, to some extent, controllable by the organisation and particular attention is paid to monitoring and control in order to ensure that money is spent cautiously but efficiently. * Stock Control - Stock levels and purchasing can have considerable impact on the financial performance of any organisation. Costs may be reduced by receiving discounts for bulk purchasing. However, it may not be practical or financially viable to buy in large quantities. For example. The substantial payment required for a bulk purchase maybe be negatively affect the working capital. > Human resources This department finds suitable people for the job. Within the business, interviews are carried out, Employment law, recruitment and selection. This department also looks out for employee's viewpoints, wages and the welfare of employees. ...read more.

Role Culture - Power, authority and respect is obtained via the individual's position or role in the company hierarchy Manchester Airport has a role culture because everyone in the business has and knows their place in the hierarchy. They also know how much influence they have on the every day running of it Dynamic/innovative culture - Energetic, enthusiastic employees and management, not afraid to venture into unknown technological and market areas. A lot of status is afforded to new development. Manchester Airport has the Dynamic/innovative culture because they are constantly bringing new technology into the business such as the Flight Information Display System (FIDS) these are boards that are in Manchester Airport change every few seconds showing when the flights are due and when the passengers need to move to the departure lounge. Manchester Airport has also now introduced a new business passengers desk where they can sign in as soon as they get there with no hassle this is an easier way for the passengers travelling business class to make the whole process transaction a lot smoother and quicker. Also Manchester Airport has new text message service where they can text the passenger when the check in opens. Power Culture - A Centralised firm, with the power and control exerted by a strong senior management team directing operations. Manchester Airport use it because they wouldn't be able to operate, as a business it would be too dangerous because if they didn't have the centralised control the business would to pieces and lack of communication may cause a lot of accidents. Risk averse culture - Employees and management are naturally suspicious of change and undertake careful planning before making decisions. Manchester Airport has a risk averse culture because they analyse everything that has to be changed carefully to see how it would affect the other workers in the Airport and get views from a few of the employees to find out if things need to be changed in that designated area ...read more.