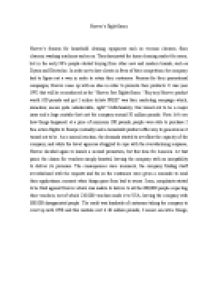 ﻿Hoover?s flight fiasco Hoover?s famous for household cleaning equipment such as vacuum cleaners, floor cleaners, washing machines and so on. They dominated the home cleaning market for years, but in the early 90?s people started buying from other new and modern brands, such as Dyson and Electrolux. In order not to lose clients in favor of their competitors, the company had to figure out a way in order to retain their customers. Famous for their promotional campaigns, Hoover came up with an idea in order to promote their products. It was year 1992 that will be remembered as the ?Hoover free flights fiasco. ?Buy any Hoover product worth 100 pounds and get 2 airline tickets FREE? was their marketing campaign which, somehow, seems quite unbelievable, right? Unfortunately, this turned out to be a major issue and a huge mistake that cost the company around 50 million pounds. Now, let?s see how things happened: at a price of minimum 100 pounds, people were able to purchase 2 free return flights to Europe (initially) and a household product-offer way to generous as it turned out to be. As a normal reaction, the demands started to overflow the capacity of the company, and while the travel agencies struggled to cope with the overwhelming response, Hoover decided again to launch a second promotion, but this time for America. ...read more.

Resistance to change, a missed opportunity, failing in adapting to customer attitudes and to a quickly changing marketplace-were the main reasons that lie behind Kodak failure. First, Kodak?s success is actually its main cause of failure, since it made it resistant to change. Its insular corporate culture believed that its strength was in its brand and marketing, and it underestimated the threat of digital. Quite surprisingly, first digital camera was invented by Kodak way back in 1975, but it did not capitalize on its pioneer invention. It was reluctant to let go its film business, which was too lucrative to give up and did not considered vital the transition from analog to digital. Steve Sasson, the Kodak engineer who invented the first digital camera in 1975, characterized the initial corporate response to his invention this way: ?But it was filmless photography, so management?s reaction was, ?that?s cute?but don?t tell anyone about it.? Kodak management?s inability to see digital photography as a disruptive technology, even as its researchers extended the boundaries of the technology, would continue for decades. As late as 2007, a Kodak marketing video felt the need to trumpet that ?Kodak is back ? and that Kodak ?wasn?t going to play grab a*s anymore? with digital. ...read more.

In an age in which the consumer is in charge, approaching marketing from the perspective of products or services alone is not enough to make consumers want to engage. They suffered from a mentality of perfect products rather than the high-tech mindset of make it, launch it , fix it? Weakness: short vision, slow responses, outdated brand association, financial problems Opportunities: smart phones, emerging markets. Threats: intense competition(canon, Fujifilm), Rapid changes in technology Recommendation: re-structure, consistency, long-term goals, reinvigorate brand image, partner with mobile phone company(lg)develop with social media Kodak began to struggle financially in the late-1990s as a result of the decline in sales of photographic film and its slowness in transitioning to digital photography, despite having invented the core technology used in current digital cameras. 2007 was the most recent year in which the company made a profit. As part of a turnaround strategy, Kodak focused on digital photography and digital printing and attempted to generate revenues through aggressive patent litigation. In January 2012, Kodak filed for Chapter 11 bankruptcy protection. In February 2012, Kodak announced that it would cease making digital cameras, pocket video cameras and digital picture frames and focus on the corporate digital imaging market. In August 2012, Kodak announced it is planning to sell its film, commercial scanners and kiosk division. Motion Picture Film will remain Kodak owned ...read more.