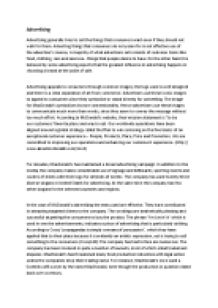 ﻿Advertising Advertising generally tries to sell the things that consumers want even if they should not wish for them. Adverting things that consumers do not yearn for is not effective use of the advertiser?s money. A majority of what advertisers sell consists of customer items like food, clothing, cars and services-- things that people desire to have. On the other hand it is believed by some advertising experts that the greatest influence in advertising happens in choosing a brand at the point of sale. Advertising appeals to consumers through common images; the logo used is well-designed and there is a clear separation of art from commerce. Advertisers use these iconic images to appeal to consumers since they symbolize or stand directly for something. The image for MacDonald?s symbolizes its non-conventionality. Hence advertisers use these images to communicate much more than words, since they seem to convey the message without too much effort. According to McDonald?s website, their mission statement is ?to be our customers' favorite place and way to eat. Our worldwide operations have been aligned around a global strategy called the Plan to win centering on the five basics of an exceptional customer experience ? People, Products, Place, Price and Promotion. We are committed to improving our operations and enhancing our customers' experience. (http://www.aboutmcdonalds.com/mcd) For decades, Macdonald?s has maintained a broad advertising campaign. ...read more.

The company, being an international restaurant within the quick service restaurant, t requires a very high level of promotional campaigns to remain competitive. This has been so, since some of the most memorable commercials in fast food industry have emerged from this particular company. The rhetoric has contributed to its world-wide expansion and in its listing on the public stock markets. With the expansion of McDonald’s to a worldwide market, the company has become a symbol of globalization. At the same time, it has acted as the spread of the American system of living. Its prominence has also resulted to regular topics of public debates on obesity, business ethics and consumer responsibility. The company also introduced a café style in accompaniment to the restaurant. To accommodate the recent trend of high quality coffee and recognition of coffee shops in general. A number of locations are connected to convenience stores and gas stations, while others are situated in Wal- Mart stores. This level of achievement is an indication of effective advertising or else truthful rhetoric. The corporation also earns revenue as an investor in properties, as an operator and franchiser of restaurants. The company’s business model is slightly different from other fast- food chains. In addition, franchising fees and marketing fees are calculated as a proportion of sales. According to Schlosser close to one in eight workers in the United States, have been employed by McDonald’s at some point. ...read more.

Adverting justifies its existence when used in the public interest. It is too much a powerful tool to be used for commercial purposes only. Infomercials are televisions commercials with a longer format; they are very useful in creating an impulse purchase, so that the moment the consumer observes the presentation, it is followed by immediate purchase of the product through the advertised toll free number. Infomercials describe, display and frequently demonstrate products and their features. They commonly have testimonials from industry professionals and consumers. According to Williamson, press advertising is an influential means of advertising. It describes advertising in printed medium such as newspapers, journals or magazines. This involves everything from media with a broad readership base. It allows private companies or individuals to purchase a small targeted advertisement at a low fee to advertise their products and services. (Williamson, 255) Celebrity branding is another powerful form of advertising that mainly focuses on using a celebrity popularity to gain recognition for the product. Celebrities are frequently involved in advertising campaigns like televisions or print adverts to advertise general or specific program. This can lead to great success if it is endorsed by various companies, and practiced prudently. Online advertising is the most recent and productive form of advertising. It reaches a massive audience at the same time being affordable, as compared to other mediums. This is achieved by the use of World Wide Web to express the purpose of delivering marketing messages to draw customers. ...read more.