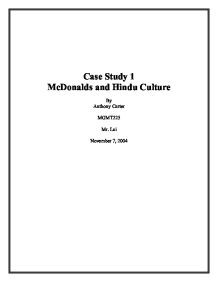 Case Study 1 McDonalds and Hindu Culture By Anthony Carter MGMT225 Mr. Lai November 7, 2004 Introduction For thousands of years, India's Hindu culture has revered the cow. Some 300 million of these animals roam India, untethered, revered as sacred providers. They are everywhere - everywhere, that is, except for on your plate, as Hindus do not eat the meat of the sacred cow. (International Business, Pg125) The placing of the cow on a pedestal is a value that is unique to the Indian culture. Values and norms are the central components of a culture. Values are abstract ideals about what a society believes to be good, right, and desirable. (Pg. 705) Norms are social rules and guidelines that prescribe appropriate behavior in particular situations. (Pg. 702) Because the value systems of different religious and ethical systems have different implications, corporations seeking to conduct business in host countries must adapt to the culture and norms of the host society. In many cases business practice of "When in Rome", is not an acceptable practice. Ethical Dilemma A few of the ethical dilemmas McDonalds' faced, and are still facing, deal with religion and the disregard for animal welfare in the Indian Culture. The World Health Organization has identified obesity as a global problem, citing the alarming statistic that over 300 million people are now obese. ...read more.

dollars. This means that while hospitals exist, the average citizen cannot afford the private heath care. (www.britannica.com) Difference if the trade association did not exist If the trade association did not exist then the ethical dilemmas McDonalds is facing would not have been an international issue. The trade association has brought about a set of standards that should be used as a guide when doing business abroad. If the trade association did not exist there would be no guide thus allowing businesses to participate in unethical practices. The lessons Globalization advocates raised McDonalds corporate responsibility report states, At McDonald's, making customers happy is what our business is all about. And we know it takes a lot to make that happen. We work hard to provide every customer with a choice of meals and an experience that exceeds their expectations. But that's only part the story. When you come through our doors and look beyond the front counter, there's a company and a system dedicated to earning your trust. And whether it's called "good corporate citizenship" or "social responsibility," we take seriously our commitment to conducting our business in a way that respects the world around us and the issues that matter most to you. (www. McDonalds. Com) As a company, I believe McDonalds has not learned a valuable lesson. ...read more.

I am pretty sure that the Official at McDonald's knew that it product contained beef by-products. Just as they have to fully disclose this type of information in the USA, they must apply the same standard on foreign soils. If it had not been for the three Indian nationalist, living in the USA filing suit, then the mockery would have continued. 2. Is there anything that McDonald's could have done to have foreseen or better prepared itself for the negative publicity associated with the revelation that it used beef extract in its frying oil? McDonald's should have expected the fallout to reach the people of India. Therefore, they should have initiated damage control. This includes making a formal apology, fully disclosing all facts regarding the discrepancy, and offering some form of compensation, which could include an offer of discounted food prices 3. How far should a firm such as McDonalds go in localizing its product to account for cultural differences? At some point, might it not lose an advantage? Firms cannot take the ethnocentric approach when establishing new business on foreign soil. One of the biggest issues facing a company that goes global for the first time is the danger of not being informed. Doing business in another culture requires that the company adapt to the culture's values and norms. This said, they must go as far as to use local suppliers, employ local citizens, and transfer some of the executive power to the people of the host country. ...read more.