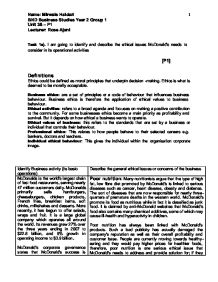 Task 1a). I am going to identify and describe the ethical issues McDonald's needs to consider in its operational activities [P1] Definitions Ethics could be defined as moral principles that underpin decision-making. Ethics is what is deemed to be morally acceptable. Business ethics: are a set of principles or a code of behaviour that influences business behaviour. Business ethics is therefore the application of ethical values to business behaviour. Ethical activities: refers to a broad agenda and focuses on making a positive contribution to the community. For some businesses ethics become a main priority as profitability and survival. But it depends on how ethical a business wants to operate. Ethical values of business: this refers to the standards that are set by a business or individual that controls their behaviour. Professional ethics: This relates to how people behave to their selected careers e.g. bankers, doctors and teachers. Individual ethical behaviour: This gives the individual within the organisation corporate image. Identify Business activity (its basic operations) Describe the general ethical issues or concerns of the business McDonalds is the world's largest chain of fast food restaurants, serving nearly 47 million customers daily. McDonalds primarily sells hamburgers, cheeseburgers, chicken products, French fries, breakfast items, soft drinks, milkshakes and desserts. ...read more.

They use marketing tactics such as the promise of toys and other gimmicks which causes children to lure in and drag their parents behind them. The management is using such selling tactics to increase its customer base and makes more profit; they do not think about those children's health and whether their food harms their future health. The management also does not have an appropriate recycling process in place. Every year McDonald's use thousands of tons of unnecessary packaging, most of which ends up littering the streets or polluting the land buried in landfill sites. Corporate Social Responsibility (CSR): McDonald's has long been claiming that the company is a socially responsible organisation who takes into account and monitors its adherence to law, ethical standards and international norms. Critics say otherwise, McDonald's junk food has been always linked to causing obesity and making an individual put on 2 stone (12.7 kilos) in a matter of a few months. Customers has suffered stomach pains, mood swings, vomiting, a reduced s*x drive, headaches, palpitations and liver problems after consuming McDonald's food. This has had an impact on the business profitability and has also affected the shareholders through decreased dividends. McDonald's also use its size and power in its favour and uses its globalisation to go into areas that is not their home and extracting money from the locals while at the same time taking business away from local establishments and causing them to suffer. ...read more.

McDonalds has also been caught on violations regarding unsafe working conditions, forced overtime, sub-subsistence wage and failure to pay legal benefits. Their factories are not open to independent monitoring by local non-government human and labour rights organisations to verify if they comply with fundamental human rights. McDonalds is linked to 4 pence-an-Hour Sweatshop in Vietnam, where seventeen year-old women are forced to work 9 to 10 hours a day, seven days a week, earning as little as 4 pence an hour in the Keyhinge factory in Vietnam making giveaway promotional toys--especially Disney characters--for McDonald's. After working a 70-hour week, some of the teenage women earn just �3 At the end of February, 200 of the workers fell ill, 25 collapsed and three were hospitalized as a result of acute exposure to acetone. The human and labour rights of these workers are being violated by the company. Exploitation of employees: Workers working in the fast food industry has long been exploited and are paid low wages. McDonald's do not pay overtime rates even when an employee works very long hours. Staffs working in the company restaurants have to work harder and faster therefore the working environment is never free of accidents such as burns. Majority of employees working for McDonalds are people who have fewer job options so they are subjected to exploitation. The company have always been opposed to trade unions. I have used the following websites and book to do my assignment. 4. ...read more.